Tom Kenny
Flambo is a flambit from the Fire Kingdom who occasionally appears as Finn and Jake's ally. He seems to have a reputation as an informant and a living lighter. He speaks in a Bronx accent. He also appears as the main character in the games Flambo's Hot Mess and Flambo's Inferno.

Flambo first appears in the episode "Business Time" when Finn uses him to light his flamethrower. Finn wears a glove when handling Flambo and squeezes his torso, causing Flambo's head to get bigger and burn stronger. Finn lets go of Flambo and he runs off as Finn begins to melt icebergs, searching for junk to build a Gauntlet dock.

Flambo returns in "The Chamber of Frozen Blades" acting as Finn and Jake's campfire while they are staking out the Ice Kingdom. Flambo apparently is their informant, having received a tip that Ice King is up to something suspicious. When Finn and Jake are about to head off to investigate the castle, Flambo clears his throat, to remind Finn of their agreement, and Finn tosses him a piece of charcoal. Flambo catches the charcoal in his mouth and eats it.

Flambo is also seen helping Princess Bubblegum with a barbecue in the episode "The Real You," but causes a fire after Peppermint Butler stops watching the grill and argues with Chet.

One of Flambo's more prominent roles is in the season 3 finale "Incendium." He is caught under a washtub that Iron Owls are hovering around menacingly. Jake saves Flambo from the owls, thinking he is a princess "on account of his girlish screaming." After Jake lifts the washtub and finds Flambo, he states that Flambo is "pretty plugged in" and asks if he knows of any princesses Finn's age. Flambo then says he knows of a princess who is "way hot" and leads Jake to the Fire Kingdom to meet Flame Princess. Flambo casts a Flame Shield spell on Jake to protect him from the heat of the kingdom (also, he spat on him), and they go into the Fire Palace. Jake begins announcing himself, but is quickly interrupted by Flambo saying to pretend he's of royal blood. Flambo then watches as Jake pretends to be the "Baron of the Grasslands." When Flame King says that it is common practice among visiting dignitaries to bring gifts, Flambo tells Jake he's "blowing it." Later in the episode after Jake manages to woo Flame Princess, she angrily blasts some of her subjects with fire and turns them to Flambits. Flambo then states, "So that's where I came from," showing that he didn't know his origins prior to this point. Flambo stays at the Fire Palace as Jake flees from the scene.

He appears in "Ignition Point" to once again cast Flame Shield on Finn and Jake so that they can enter the Fire Kingdom and retrieve Flame Princess' scented candles.

In the episode "The Chamber of Frozen Blades," he stops Finn and Jake before entering the Ice King's domain and asks for a piece of coal after helping them spy on the Ice King. This suggests that while Flambo is willing to be helpful, he is also mischievous. In "Incendium," Flambo neglected to mention that Jake would need to be of royal blood to talk to Fire Kingdom royalty and was quick to blame Jake for not bringing gifts, though he hadn't warned him about either of those things.

Flambo has stubby arms, legs, a forked tongue, and a long, fiery tail. He runs on all fours but can also stand upright. When he eats coal, his flames burn more intensely.

Naturally, Flambo has the ability to ignite fire. He can also shapeshift into a plain fire as seen in The Chamber of Frozen Blades. Flambo also knows fire magic, with the main being Flame Shield to protect those who are vulnerable to the extreme heat of the Fire Kingdom.

Finn lighting his flamethrower with Flambo

Flambo's appearance in "The Chamber of Frozen Blades" 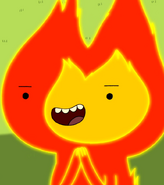 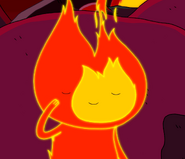 "So that's where I came from."

Flambo's appearance on the cover of the video game "Adventure Time: Explore the Dungeon Because I DON’T KNOW!"
Español
Community content is available under CC-BY-SA unless otherwise noted.
Advertisement