"Five Short Tables" is the ninth episode in the eighth season of Adventure Time. It's the two hundred and thirty fourth episode overall.

Fionna and Cake go on a cooking adventure to push Cake's art to an all-new level.[2]

The episode opens with Ice King hastily flying after a worm in his castle. As he descends, he finds several pages from his fan fiction strewn about and discovers that Gunter, along with the other penguins, broke into his fanfiction vault to edit his works. After getting a critique from Gunter, Ice King freezes the penguin and uses the stray pages to create a new story.

Fionna and Cake are in their tree house, and Fionna waits impatiently for breakfast while Cake is making flapjacks. Once they are ready, Fionna tries to eat a flapjack, but Cake stops her and says that the flapjacks tell a story, so logically she can only eat breakfast in chronological order. After some struggle, Fionna tells Cake that the flapjacks only look like blobs, so she can't really tell which part is which. Cake agrees and declares that she must start making "non-fiction" flapjacks. After gathering all the proper ingredients, the duo set out to the candy kingdom.

At the kingdom, Fionna recommends that Cake uses Prince Gumball as her first subject because his absorption in his work can cause him to stay still for days. When the two reach the window they see Gumball frantically running about and searching for something. After he finds and consults his candy periodic table for a strategy, he clears his desk of his work and calls for Butterscotch Butler, the Scottish butterscotch butler. When she arrives, Gumball challenges her to a board game to which she reluctantly agrees to. As Gumball tries to apply the strategy, Butterscotch Butler states that his attempts are useless and renders his strategy null by prying on his insecurities. After dramatically losing, Gumball tosses the board game out the window, and Cake and Fionna decide to try somewhere else. Gumball demands to be told how Butterscotch Butler knows all these things about him, and she explains to his dismay that he simply just leaves his diary everywhere.

In the forest at night, a coughing Lumpy Space Prince desperately runs away and hides from Marshall Lee. The vampire, holding a tablespoon and a potion, pleads with Lumpy Space Prince to drink the potion so he can stop coughing. When Marshall Lee finds LSP, LSP pretends to be someone else so he can avoid drinking the potion. To try to convince LSP to come out, Marshall pretends that a monster caused LSP's cough, and that said monster is currently attacking Marshall. The Vampire King uses his beast form to destroy trees in order to make sound effects for the imaginary fight, and pretends to lose once LSP comes out of his hiding place. LSP begs Marshall not to die, but Marshall feigns that it's too late for him. He gives LSP the potion and tells him to drink it and live as it's not too late for LSP just yet. LSP drinks the potion and pretends to die next to Marshall. When the two sit back up, Marshall Lee notices that the cough is gone, but soon large bumps appear on LSP's face and Marshall reluctantly states that he may have given him the wrong potion. Up in the trees, Fionna and Cake watch the scene unfolds, and Cake happily reveals that she's improving on her flapjack art, showing Fionna her flapjack depiction of LSP kneeling down by Marshall Lee's side.

At the Ice Kingdom, Ice Queen reads to her penguins the story of Ice President reading his own fan fiction to Flynn the human being and Jacques the Raccoon. When she finishes, she asks the penguins how they liked it and becomes upset when she sees that they are all distracted by Cake's flapjack art. Cake offers to make a flapjack portrait for Ice Queen, but she reluctantly refuses and begins to attack Fionna. Cake uses her newly developed pancake skills to make Fionna a flapjack sword. While Ice Queen and Fionna attack each other, Fionna compliments Ice Queen on her story before deflecting an ice beam that freezes the queen. Cake puts a flapjack face on top of Ice Queen's actual face and leave.

After Ice King finishes his story, he asks Gunter what he thinks the themes of the stories were. When Gunter guesses wrong, Ice King informs the penguins that it was about tables. The breakfast table where Cake served Fionna flapjacks, the Periodic Table for Gumball, the table of contents Flame Prince burned, and the table spoon Marshall Lee held. The Ice King doesn't know the table theme for Ice Queen's story, so he avoids explaining that story and almost exclaims that he'll call those short stories "gray-[bles]" but changes his mind to call them "Tables." While Ice King goes on a tangent about his new story structure, an out of shape Cuber turns off his T.V. and sadly says that he'll never be able to look at tables the same way again. 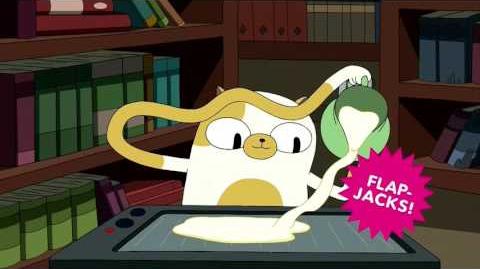 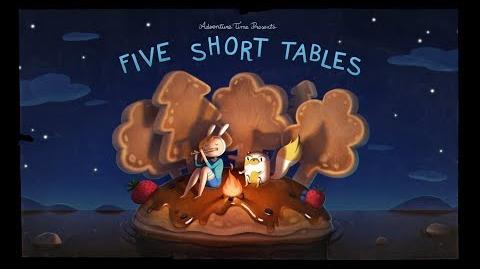 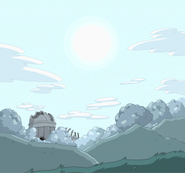