It starts out with a strange man named Cuber who greets the audience. He wants the audience to guess the "theme" in a series of five shorts from the "days of old" as they are all connected in some way. He then takes out his holo-pyramid, which has pictures of Finn, Jake, BMO, Princess Bubblegum, Ice King, and Lumpy Space Princess. The shorts begin.

Finn and Jake leave BMO alone in the Tree Fort. They say that they are going to the "Grocery Kingdom" and will be back in an hour. BMO then runs up to the Tree Fort bathroom, locks the door, and then asks itself "Finn? Jake?" to make sure no one is watching. Once alone, BMO talks to its reflection in the mirror. BMO pretends to have an imaginary friend named "Football" and pretends to impress the friend by showing it that it is a "real living boy." Football is impressed by all the things BMO accomplishes like "brushing its teeth," "cleaning itself with soap," and "peeing" although BMO only pretends to do these things and does a poor job doing it. The camera then zooms out to show that Finn and Jake have been watching BMO the whole time. Finn comments about BMO's strange actions when they are gone. They then check off "Prove that Beemo does weird junk when nobody is around" on their list of things to do.

For accomplishing this, they try to high-five each other, but fail miserably, missing the first time and hardly hitting the second and third time. They are disappointed by their performance and they attempt a high-five again, but this time with a running start. They succeed, but they feel they can do better and back up even further for an even greater high-five. After accomplishing this achievement, Finn says he knows how he and Jake can do the "most ultimate high-five ever," and Jake says "You've gone crazy mad with power lust, and I'm loving it." There is a scene change and Finn is seen on a catapult talking through a walkie-talkie to Jake who is in the Desert of Doom using an unknown skeleton and his stretchy powers to catapult himself, Finn then exclaims "SUPER ULTIMATE HIGH FIVE GO!" and they are thrust towards each other. The scene changes and the graybles "Smell" and "Taste" are shown afterwards. In both shorts, Finn and Jake are seen flying past at high speeds. Finn and Jake both reappear in the fifth short story, "Sound."

Princess Bubblegum is shown working hard to create a sandwich for Cinnamon Bun. She makes the cheese by spinning a cow around on a centrifuge. She then creates the lettuce by growing and shrinking a small piece of lettuce to the perfect size with chemicals. The tomato is made by combining a jellyfish and a balloon in a transportation machine. She chants odd spells to make the loaf of bread. After doing all this she cuts up the ingredients and combines them in a unique way into what she presents to Cinnamon Bun as "the most ultimate sandwich that ever existed and ever will exist." To her horror, Cinnamon Bun places the sandwich directly in his stomach without tasting it; he then regurgitates most of it out onto her face and the floor. Cinnamon Bun then thanks Princess Bubblegum for the sandwich. Behind a window, Finn is seen flying through the air, screaming, as the scene ends.

In the next scene, the Ice King searches through his fortress for the source of a stench. He finds Gunter and accuses him of "blowing up the place" with his "nasty booty." The Ice King tells the penguin not to worry because he will solve the problem. He then places Gunter on a sheet of ice and sends it to sea claiming that he will never succeed in acquiring a princess so long as Gunter is "stankin' up the place." However, upon returning to his cave, the Ice King discovers that it still smells. With Gunter out of the picture, the Ice King quickly realizes his armpits are the source of the terrible stench. The scene then cuts to a penguin turning the shower knob, and we see the Ice King standing in the shower with his arms raised and a penguin hanging from each, both furiously scrubbing his armpits as he orders them to scrub harder. After the shower, the Ice King discards the penguins that were washing him in a pile of garbage by the trash cans in front of his fortress. He then turns to find that Gunter has returned, and he is soaking wet. The Ice King cheerfully tells Gunter of his discovery that his armpits were the source of the stench, and then he apologizes as he carries the penguin inside. The Ice King observes aloud that he has no idea how his armpits got so stinky, immediately after which Gunter squeezes under Ice King's arm and farts without the Ice King even noticing, revealing Gunter to be the true source of the smell after all. After this happens, Jake flies by the window, and then the scene changes.

At the end, Cuber asks if the viewer learned the theme of the stories, and tells the viewer to pause the show to think about it while he makes a snappy pose. He then reveals to those who could not figure it out that the theme was the five senses, before ending the show. 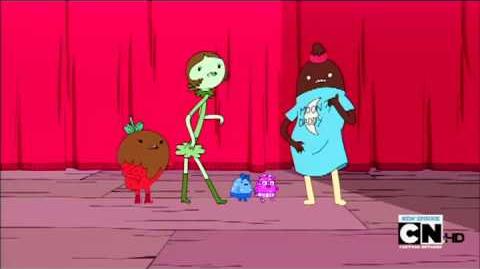 Adventure time these lumps by the candy girls

Pad of Paper with checklist - checkmarked 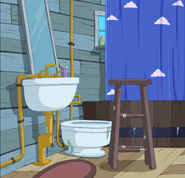 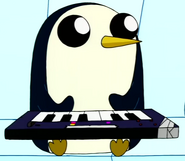 Gunter is not pleased with the Ice King.

The creature Princess Bubblegum uses to make the tomato 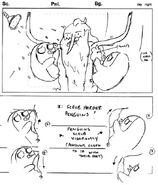