Tom Herpich
Steve Wolfhard
"Five More Short Graybles" is the third episode in the fifth season of Adventure Time. It's the one hundred and seventh episode overall.

Finn and Jake's tale starts inside Lady Rainicorn's house with Jake bringing Finn a book he found that he believes is a warlock spell-book, which is actually an old pre-war book of nursery rhymes, from which Jake reads "Little Jack Horner," believing it to be a spell. When they try the "spell" and fail they decide that sticking their thumbs into things and saying "Oh, What a Good Boy Am I" will activate the spell. They then proceed to stick their thumbs in random places throughout the Land of Ooo, including an ant hill, a bird's nest, Lady Rainicorn's baby bump, a tree, a flower, a bottle, a chipmunk, a mushroom, and a toad. Thumb is the alternate theme for this grayble.

In Marceline's tale, Marceline is searching for Wizard Bill's music store to buy a guitar that plays "the most savory licks in Ooo," and encounters a Rock Giant. She asks the Rock Giant to point her to the shop, but she could not see where he is pointing at because the giant's arm is so long. She gets on his finger and tells him to point to it again, which he does, bringing her all the way to the store. Wizard Bill gives her a devil/monster bass, and she begins to play it. Index finger is the alternate theme for this grayble.

In Tree Trunks' tale, while strolling in the Candy Kingdom, she sees someone making an obscene gesture at her and reports it to the Banana Guards, who prove unhelpful. So she decides, along with Cinnamon Bun and the Gumdrop Lasses to take the law into their own hands, and they attack the person when Tree Trunks realizes that it was a misunderstanding because the person was a statue making a fist and Shelby was on the top of its middle finger. Middle finger is the alternate theme for this grayble.

In the Ice King's tale, the Ice King announces to the penguins that they will have a 'New Mommy,' which is his foot that he drew a face on. He gives "her" a wedding ring and the penguins drink his "good luck" tears, but he slaps Gunter away from him because Gunter was on a no-salt diet. Later Ice King and his "wife" are sitting on the window together when Ice King sees and falls in love with his other foot that he also drew a face on. Ring finger is the alternate theme for this grayble.

In BMO's tale, it gives Football another lesson in being human. During the lesson they nearly short themselves out while practicing how to "drink" tea with their pinkies extended (after BMO demonstrates how to use a grapefruit spoon, salt shaker and turnip grincher). The lesson is interrupted when Finn and Jake return home. The guys are disappointed that they could not get the "spell" to work, to which BMO cheers by having them stick their thumbs in his controllers, and playing the game Super Good Boys. Pinky finger is the alternate theme for this grayble.

Cuber then announces the theme, which is the five tastes: Jake states that the plum from the pie was sweet, Marceline says that the music store owner has a guitar that plays the most savory licks in Ooo, Tree Trunks says that the incident left a sour taste in her mouth, the penguins drink Ice King's salty tears, and "Football" says that the tea is bitter. It is then implied that Cuber is interrupted by the "audience's" confusion about the theme given that the far more obvious connection between the stories is that each is about one of the five fingers. (Finn and Jake constantly stick their thumbs in various things throughout the episode. The Rock Giant uses his index finger to play the drums and to assist Marceline to the music store. Shelby accidentally mimics an obscene gesture when sitting on the middle finger of a fist on a statue. Ice King does a bit of role-playing and puts the engagement ring on his ring finger, and when BMO teaches "Football" to drink tea, he holds the cup with his pinky finger extended.) Cuber then laughs and states that people have not had five fingers for "twenty blabillion glaybles" and ends the episode. 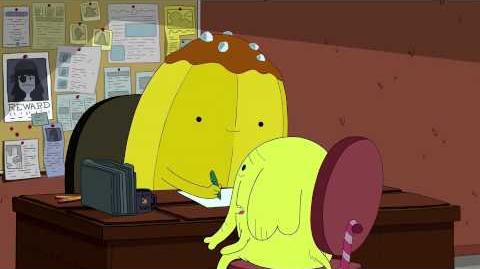 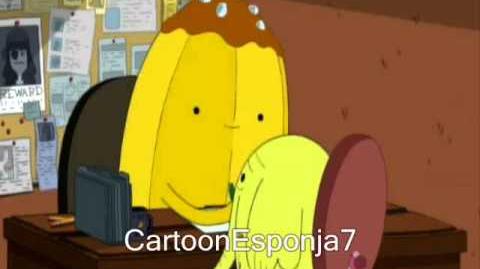 "How do you spell your name?"

"It feels so math to finally be normal."