Fire Wolves are creatures that inhabit the Fire Kingdom. Like many wolves, they hunt and travel in packs. The wolves first appear in the episode "Thank You," where a Fire Wolf Pup is taken in by a Snow Golem until he returns him to his pack. They also appear in "Incendium," where a pack of Fire Wolves runs through the Fire Palace as Jake enters the castle.

They have black fur with what look like orange-red cracks on them. Their eyes are bright orange with red pupils. Adult wolves can grow up to be very large in size to the point that they can be used as mounts, such as Jake 2.

The bodies of Fire Wolves are shown to be very hot and can easily burn wood or melt snow. Fire Wolves will sometimes emit flames from the cracks on their bodies. This characteristic makes them natural enemies of ice-based creatures such as the Snow Golem. However, "Thank You" demonstrates that the two species can interact without conflict as Fire Wolf Pup's pack allows it to play with the Snow Golem.

Cinnamon Bun taught Jake 2 how to fly, meaning they possibly have the ability to fly, however, Jake 2 is the only wolf that has demonstrated this ability so far.

In the episode, "Happy Warrior," Finn, Lumpy Space Princess, and Gunter walk past a pair of Fire Wolves, now being assimilated with the Fire Element, fighting. They look the same as they used to except now the fire that embodies them is blue. 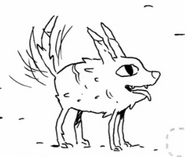 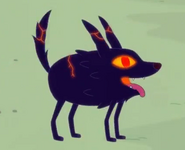 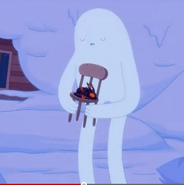