John DiMaggio
Fire Newt appears in "Ocean of Fear." Finn and Jake chase him out of a forest for stealing a pair of shiny boots. They try to fart on him because "poots on newts" is the penalty for stealing boots. He seems to be repulsed by the farting claiming it is gross. The Fire Newt can breathe fire and swim. He is "pooted" on by Jake, much to his chagrin.

The Fire Newt has purple skin, a purple tongue, and a black spot on his back, tail, arms and legs. There are also several red rings on his back. He has external gills that look like feathery ears, purple spots all over his body, and yellow eyes. On his feet are the light-blue, speckled cowboy boots he stole. 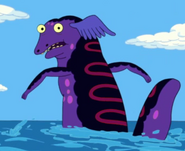 Fire Newt escaping into the ocean