Aleks Sennwald
Hanna K. Nyström[2]
"Fionna and Cake and Fionna" is the twenty-sixth episode in the eighth season of Adventure Time. It is the two hundred and sixty-fourth episode overall.[1][3]

Finn, Jake and BMO are having fun river rafting (with Jake as the raft). They are having fun until BMO says it's time for Ice King's book reading. All three go to the reading, although Finn does not want to. At the library, the Ice King is holding a public reading of one of his Fionna and Cake fanfictions. After his reading ends with no applause, the Ice King gets mad at the audience making the audience to clap afterwards. Suddenly, someone comes to the library and says that Ice King's story is wrong, and it is revealed to be an older Fionna. She has a tape with her which reveals the truth.

In a swamp, they find a way in through a door and takes the fancy coffin left there. They bring it into their vault, and a bandaged hand comes out of the coffin. The Ice King urges her to continue the tape, and Fionna agrees.

A mummy comes out of the coffin, but the tape ends there. The Ice King invites her to live with him, and she instantly begins taking charge. He asks her where Cake is, but she says that there was an accident, and she does not want to talk about it.

The tape finishes quickly, and Fionna goes to sleep, but the Ice King steals it from her. He continues watching the tape, which shows that the mummy is truly the Queen of Ooo. The Ice King ends the tape confused, but realizes that the person in his home is not Fionna.

When he confronts her, she reveals herself to be an old lagamorphic humanoid, who had intercepted the signal with the tapes and modeled herself after Fionna. The Ice King exclaims that he feels betrayed, and she realizes that she is no better than the mummy.

Late at night, a red beam comes down from the sky to the Ice King’s head, with images of Fionna and Cake. 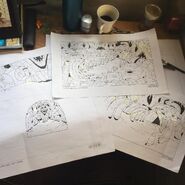 Retrieved from "https://adventuretime.fandom.com/wiki/Fionna_and_Cake_and_Fionna?oldid=812903"
Community content is available under CC-BY-SA unless otherwise noted.