Fionna's swords refers to the types of swords Fionna has used.

The crystal sword is a weapon seen used by Fionna. It was given to her by the Ice Queen disguised as Prince Gumball. The sword has the appearance of a pink sapphire, and it has a pinkish glow. The sword is also retractable, akin to a lightsaber. At the Ice Queen's command though, the sword turns into a giant block of ice, encasing the wielder's hands. Fionna proved that this too was an adequate weapon by using the ice block to beat Ice Queen over the head and shatter the icicle encasing Prince Gumball.

As a thank you for all the times she's helped him, Prince Gumball used the Ancient Enchanted Oven to make her a new sword in the third issue of the comics. The sword has a golden blade and pommel, a ribbon bow cross-guard, and two ribbons attached to the sword. It's blade is retractable and on its pink, wand-like hilt is three wish star buttons that allow Fionna to make small wishes.

The Wish Star Sword is later used in the episode "The Prince Who Wanted Everything," where Fionna utilizes it to free Flame Prince, Marshall Lee, Turtle Prince, and Prince Gumball from being servants. It was later revealed that the sword has the ability to turn into a microphone, though it might be just one of Fionna's wishes. Unlike the comics, the Wish Star sword now has only one button on its hilt.

While Fiona was fighting the Ice Queen in the episode Five Short Tables, Cake quickly cooks Fiona a new sword made from: purple chicken milk, dramatic cornmeal and the reflective tears of a reflective turtle. Despite being made out of baking ingredients, the sword seemed quite durable and even possessed the ability to reflect Ice Queen's ice blast right back towards her, presumably from the reflective tears cooked into the sword. To quote Cake "Because Ima bout to bake the toughest flapjack ever"

She has other swords and weapons in the tree fort like Finn.

Fionna and the Crystal Sword 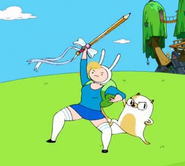 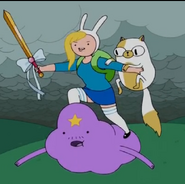 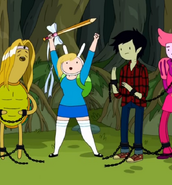 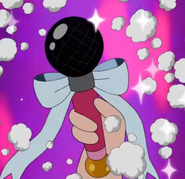 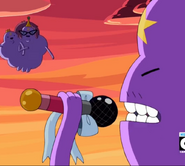 Broken Bottle Sword
Add a photo to this gallery

Retrieved from "https://adventuretime.fandom.com/wiki/Fionna%27s_swords?oldid=797045"
Community content is available under CC-BY-SA unless otherwise noted.