"Finn the Human" is the first episode in the fifth season of Adventure Time. It's the one hundred and fifth episode overall.

Finn and Jake chase the Lich through a dimensional portal where they meet Prismo, who tells them that the Lich wished for the extinction of all life. This leads Finn to wish that the Lich "never even ever existed."[2] and the creation of the Farmworld reality.

After being pulled into the portal, Finn and Jake follow the Lich into Prismo's in a Pickle Wagon. They arrive just in time to see the Lich vanish after making his wish which was the extinction of all life. After a short conversation with Prismo, Finn wishes that the Lich had never existed and is promptly transported into the reality created by his wish.

After being called in by his mother, who is holding a baby, Farmworld Finn is told to go into town and sell their mule Bartram. Farmworld Finn protests, but his mother insists. He follows her gaze out the window to see his father being pushed around by members of the "Destiny Gang." He is seen next talking to Bartram trying to comfort himself when he notices the mule is missing. He wanders a little ways to find Bartram in a tree. While going to get him down, he falls into a hole covered by underbrush and Farmworld Jake follows him. Farmworld Finn looks up to see the skeleton of Simon Petrikov with the crown under a frozen bomb.

When he sees the Ice King's crown, he thinks to sell it instead of Bartram and goes to retrieve it. As he nears it, the decrepit Farmworld Marceline jumps out from behind the bomb with a gun. She tells him to back off and that he cannot have the crown. She then tells him of how Simon died when the great mushroom bomb was deployed. He used his ice magic to freeze the bomb but was crushed in the process. The crown, stricken with grief over the death of its master, then unleashed its power and froze the entire earth for 400 years. For 600 years, an aged and decrepit Farmworld Marceline has been guarding the crown to ensure it never harmed anyone again.

Now in the Junktown market, Farmworld Finn tries to sell the crown. A man says he will take it, but he has no money and offers to sing at Finn's house instead. Tromo, one of the destiny gang, takes the crown and gives it to Big Destiny, under the pretext that "property of old dead person go to Big Destiny" and refuses to give money to Finn. Finn realizes that the crown was not really his and moves on. Marceline, however, yells that the crown is hers and that she is half-demon. Destiny then tells Tromo to jack up Farmworld Marceline and Trami to take Bartram for dinner. Trami takes Bartram and runs up to their mansion with Destiny.

As Tromo is attacking Marceline, Farmworld Finn shoves his flute into his nose, and then Choose Bruce throws lettuce at him. Tromo then retreats into the mansion saying that Finn has made a big mistake. Farmworld Finn promises Farmworld Marceline that he will return the crown to her. Choose Bruce then gives Finn a sword for his mechanical arm to which Finn responds approvingly, stating that it "feels natural, like peeing outside."

He then runs up to the mansion and down the hall toward Bartram, but is tripped by Destiny. Farmworld Finn gets up and begins to sword fight with Destiny, but is knocked down. Finn demands his stuff back and Destiny gives it to him as his "last possession."

Destiny then shows Finn that he had his henchmen burn the market. Farmworld Finn grabs Bartram and the crown and runs into the market place. Choose Bruce is weeping and tells him to go save his family. On his way, he grabs Farmworld Marceline and pulls her up on Bartram. When he arrives at his house, the gang has already set it on fire (Destiny is somehow already there.) with his parents and infant brother trapped upstairs. Finn asks Marceline if the crown is magic and she tells him it is very dangerous magic. He then puts the crown on his head, and the power begins to flow through him. 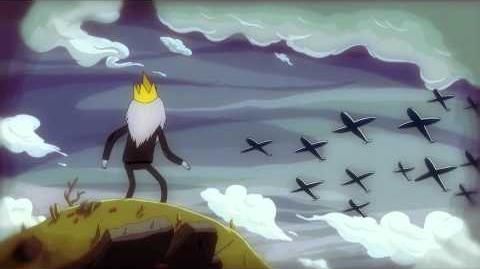 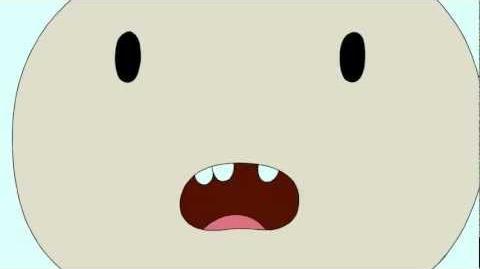 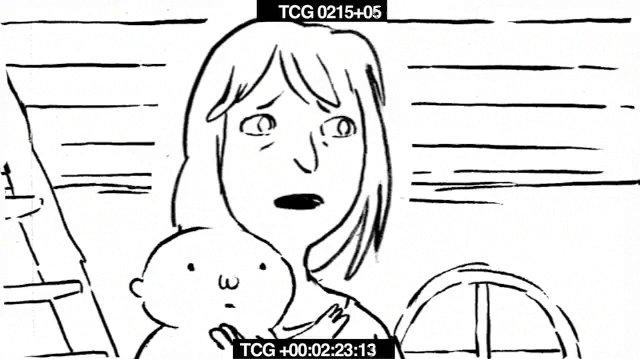 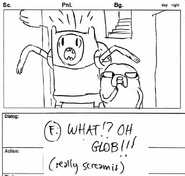 Simon dead under the bomb

Farmworld Marceline warns of the dangers the crown poses 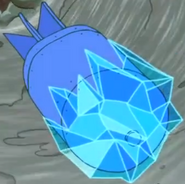 "My name is Finn Mertens!"

Some just want to see the world burn.

All hail Finn, the Ice King?