"Come Along With Me"
Finn Cakes are tasty and special cupcakes that are shaped like Finn and were created by him. They are only to be eaten by Finn. Finn tells Jake not to eat his Finn Cakes when Finn was leaving to pick up BMO from soccer. The Bear ended up eating all of the Finn cakes and Jake recorded it on video. Finn was still angry at Jake, even though Jake didn't eat the Finn cakes since Jake stood around watching the Bear without stopping him.

Finn cakes are cupcakes that have Finn's face frosted on them. They also have a blue patterned wrapper, possibly trying to resemble his shirt color.

A massive Finn cake appeared at the end of "Seventeen."

A small, anthropomorphic Finn cake appears in the episode "Come Along With Me". It has arms and legs and is reading a book, specifically two pages one with a Finn face and another with a Fern face with the caption "Spot The Difference". It appears during the time where Finn, Fern, Princess Bubblegum, Gumbald, and Jake are in the hallucination caused by the Nightmare Juice. 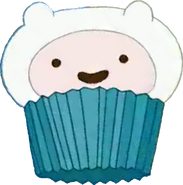