Finn's pack is a green backpack that Finn wears during his adventures through the Land of Ooo. In addition to containing basic adventuring gear, Finn's pack often doubles as a seat for smaller characters so that they do not need to walk. After his original pack is destroyed in "Mortal Folly," Finn gets a new backpack in "Mortal Recoil" made by Raggedy Princess and other princesses.

The pack is round and green, with a lighter green flap that unzips along the top. The pack is somewhat elastic in that it is capable of expanding slightly and has a large carrying capacity, as it was able to hold all of Stanley's family (with the exception of the four marshmallows and a watermelon). Recently, there seems to have been a strap added to the pack which was used to hold Finn's Root Sword or Demon Sword.

Finn is almost always wearing his pack while adventuring, dancing, playing video games and even swimming. He occasionally goes to bed while still wearing it. The pack appears in the opening sequence and is worn in almost every episode.

Episodes in which Finn does not wear his pack

Characters who have sat on or been in Finn's pack

Finn's pack is known to contain, or to have contained, the following objects: 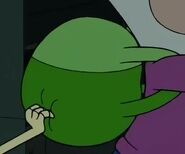 A real Finn backpack is available on the Spencer Gifts website.
Español
Community content is available under CC-BY-SA unless otherwise noted.
Advertisement