Farmworld Minerva, also known as Finn's mom, is an alternate version of Finn's biological mother who first appears in "The Lich". She is married to Martin Mertens, with whom she has two sons. She exists in an alternate timeline of Earth's existence called Farmworld, created when Finn attempted to wish The Lich from ever existing and throwing himself into this universe. In this new dimension, she urges Finn to come inside, and that it is very important he does so. She tells Finn to sell their mule, Bartram, to pay the Destiny Gang.

She reappears in "Crossover", wherein the Mertens family, including Farmworld Jake, are reunited.

She wears a long-sleeved, ruffled, dark pink dress that hides her feet from view and what appears to be a wedding ring on her finger. She also has blonde hair just like Finn, although hers is between chin and shoulder-length. Her hair, along with the bags under her eyes, resembles that of her primary timeline counterpart. 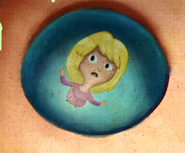