Gladiator Ghosts (formerly)
Fight King's arena is a colosseum that is the main setting of the episode "Morituri Te Salutamus." The arena appears to be an ancient colosseum imbued with some of the power of the Fight King because it is guarded by a "moonlight barrier" and seals its entrances after Finn and Jake walk in. It has a large underground chamber where the remnants of gladiators rest. After Finn breaks the Fight King's sword and destroys him, the Gladiator Ghosts leave, and the arena magically falls to pieces and floats away. The arena's story and appearance are reminiscent of a Roman Colosseum. 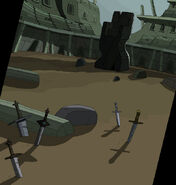 The inside of the arena

The gladiator graveyard under the arena