Mark Hamill
The Fear Feaster makes his appearance in the episode "Ocean of Fear." He first introduces himself as the manifestation of Finn's fear, but Finn and the Three Wise Men later call him the Fear Feaster. He appears to live inside Finn's stomach and emerges from his bellybutton when Finn realizes that he is afraid of the ocean. He mentions repeatedly that he hates this arrangement, as Finn's guts aren't very pleasant. The Fear Feaster is defeated when the Three Wise Men—who appear to be similar kinds of entities—emerge from Finn's belly and convince him that he is still a hero. After his defeat, the Fear Feaster is banished back into the depths of Finn's guts. Finn said to the Fear Feaster, "Everybody has a flaw, and it looks like yours is smelling like my nasty guts."

Fear Feaster makes a brief appearance in "King Worm" unlocking a chest that contains Finn's deepest gut fears in order for him to defeat King Worm.

The Fear Feaster makes his final appearance in "Billy's Bucket List," where when Finn tries to complete Billy's bucket list,

he is turned away by a wave (similar to "Ocean of Fear"). After Finn knocks himself out and he has his dream, he wakes up, and, to his dismay, he's in the ocean. After the Fear Feaster says his final line "Wake Up... WAKE UP! [evil laugh] No Mortal blade can harm..." Finn's sword takes control of his body once again and slashes through the Fear Feaster, cutting him from Finn and ultimately destroying him. Very soon after, Finn realizes that he is not afraid of the ocean anymore.

The Fear Feaster is a gaseous being of a deep blue to black coloring. His eyes have no pupils and are a grayish blue, he appears to be missing a few teeth, and though he has no nose there are holes which simulate nostrils. Fear Feaster also has a black mustache. His face is similar to the Evil Ocean's. 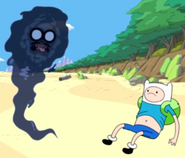