Cloris Leachman
Farmworld Marceline refers to an alternate version of Marceline from the Farmworld timeline, who has protected Simon Petrikov's dead body for 1,000 years, making sure no one stole his crown. Since she never became a vampire, Marceline aged over the past 1,000 years (much more slowly than humans due to the fact that she is half demon). She is ultimately killed when the mushroom bomb goes off and she falls within its liquid, her final act being an attempt to save Finn from the Lich-possessed Jake.

Unlike regular Marceline, aging has altered her physical appearance (this may be due to her not being bitten by a vampire in Farmworld). Most of her body is wrinkled and she is much fatter than Marceline. Her skin is grayish-blue and her eyes are fuller than Marceline's, whose eyes are just dots. She sports a brown coat and hat. Apparently she has some sort of laser rifle that she uses to attack Farmworld Finn, but it has no effect on him. This is possibly because the gun is broken and/or Marceline was too crazy to know it did not work. 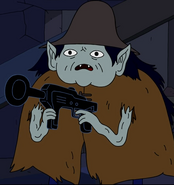 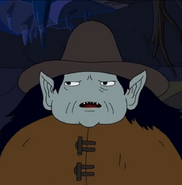