His appearance varies considerably from that of the Finn from the Land of Ooo. He has a mechanical arm fixed with tape, wears a brown sash-like garment (green in "King Worm") which appears to button to his pants. He has long sleeves, long pants tattered at the ankles, has a backpack identical to normal Finn's but it is sometimes seen as dark green and one solid color. He also has quite a pronounced nose as well as much larger and pointier, slightly more detailed eyes (the eyes and nose also make a slight resemblance to the Earl of Lemongrab or BMO during the dream sequence of "BMO Noire") and lacks socks or shoes. His voice is identical to regular Finn, save that Farmworld Finn exhibits a slight "country accent" and a significant lack of the vibrant verbal enthusiasm exhibited by regular Finn.

Based on his regular model sheet, he seems to be heavier than Finn, or at least less fit.

After having been exposed to the Ice Crown, his voice has a more "insane" enthusiasm to it due to the madness and sadness effect of the crown and its magic. As seen in "Crossover," he has somehow gained a cape after the events of Jake the Dog. His facial features have changed as well, as his skin has turned blue, his nose is longer, his teeth are more pointy, and his hair has become longer as well as white. Overall his appearance is starting to match that of Ice King and Evergreen (or at least Gunter's view of him), which is a side effect of the crown.

When he is possessed by the crown, he undergoes physical and psychological changes similar to those of Simon Petrikov: his eyes turn completely blue (he also gets bags under them) then turns normal for a while when he hears his baby brother cry (which means he is fighting the crown's power and temporarily reclaims his sanity to protect his family, similar to what Simon does with Marceline). His blonde hair appears long and wild (which allows him to fly). He also begins to go insane, only his insanity is quicker, since he allows the crown to take him over, in order to combat first the Destiny Gang, and then the bomb (Simon was an unwilling victim of the crown's power, while Finn deliberately wore it to gain the power of ice). His insanity is evidenced by the deranged monologues he gives about "ice and whispering snow" and about being "the hand of madness," as well as his megalomania and desire to freeze the world. He becomes very protective of the crown when he wears it, urging Jake to "back off my crown [...]! I warn you!" After realizing what has happened to him, he sadly tells his family to go far away on Bartram. It is evident that he doesn't know about the whispers telling him to freeze the world being only to him, as he asks," can't you hear the voices?" to the Destiny gang after he has frozen them.

In "Crossover", Prismo sent normal timeline Finn and Jake to stop Farmworld Finn from getting all the gems into his timeline's Enchiridion and doing damage to other universes, possibly including theirs. Thanks to his counterpart, Farmworld Finn was later turned back into a Human, Farmworld Jake was turned back from a Lich into a dog, and they were both reunited with Finn's family. 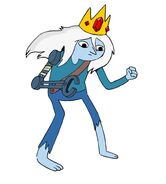 In "King Worm," Farmworld Finn is seen in the mirror.

Finn and Bartram inside the house.

Finn is depressed about selling Bartram.

Finn changing out the weapon for his arm.

Jake and Prismo viewing Finn on the TV wall.

Farmworld Finn's appearance in Together Again