Ewlbo is a computer virus created by Randall N. Byron. It was created as a code that would allow a player's video game characters to become stronger and sometimes give the characters his face, but shortly after Randall released the code the first Mushroom War occurred. This forced the code to spread to various decaying computer systems after the apocalypse eventually ending up at a military base and attempted to infect the Omega Algorithm, software designed to destroy whatever target system it was installed into. After two week of battling each other the two programs merged into the new program, Ewlbo, and obtained new programming to destroy computer systems. The program was in the game Super Guts Punch 3 and when BMO allowed the game to be played it infect him and wirelessly infected all the robots in Ooo. After taking control of all the robots, Finn, Jake and Marceline try to stop him from destroying everyone in the world. The software version  of Randall tried to overwrite Ewlbo but ended up getting overwritten himself. Ewlbo the took the name Kewlboy (adopting Randall's username as his own), then he merged all the robot into a giant amalgamation and attempted to destroy Finn, Jake and Marceline. However, after a lengthy battle the heroes were able to access BMO's Main-Brain-Game-Frame and use a cheat code to free all the computers under Kewlboy's control. However Kewlboy still controlled BMO and sent an endless wave of in-game enemies to attack them. Luckily, Marceline figure out that they could rip apart Kewlboy's in-game icon feed them to the in-game enemies, freeing BMO and ending Kewlboy once and for all. 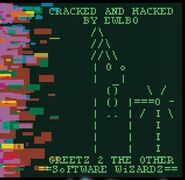 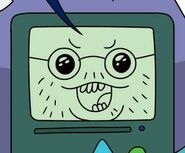