Mark Hamill
The Evil Guy (also known as the Dark Magician) is a wicked being who appears in the episode "The Enchiridion!" as the last trial to obtain the Enchiridion. He introduces two final challenges for Finn, who destroys him afterwards.

For the final trial, the Dark Magician transports Finn into his "Brain World," where Finn must destroy the Heart Beast. After Finn defeats the beast with a flurry of punches to the top of its torso, the evil guy orders that, as "one last last trial," Finn must slay an unaligned ant. However, because the ant is not evil, Finn refuses to slay it. Instead, Finn exits the evil guy's Brain World, sprints toward him while screaming "NEVER!" and kicks him in the crotch, which causes the evil guy to evaporate into a red cloud of smoke, presumably vanquishing him.

The evil guy's appearance is that of a scythe-less reaper with glowing red eyes and sharp teeth. The rest of his face is obscured by a gray hood. He wears a tattered gray cloak coated with a green mossy substance. He has pale bony hands as well as gangling arms. As Finn demonstrates, a kick to the "boingloings" is capable of vanquishing him. 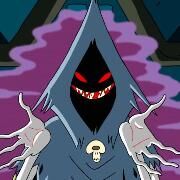