A lot of random ingredients

The everything burrito is an extremely large burrito filled with almost everything that is food, and a few things that are inedible like pans. In "Conquest of Cuteness," Jake prepares the everything burrito for breakfast for both Finn and himself. The burrito eventually meets its end when it is buried by Jake, much to his dismay, in a grave outside the Tree Fort. It is buried with a sign that reads "My Burrito" out of the suspicion that it was poisoned by the Cuties, ruled by the Cute King.

The everything burrito appears to be a normal burrito, only it is much larger due to the fact that it contains many ingredients.

The contents of the everything burrito include at least: sunny-side-up eggs, a spatula, purple berries (presumably grapes), a fluffy pink swirled substance (presumably cotton candy), a buttered waffle, a green teacup, a stack of buttered flapjacks, a frying pan, a drinking glass with a straw and yellow liquid inside, a carrot, a hamburger, lettuce, some grapefruit, a pineapple, a slice of lemon, a box of noodles, a bowl of cereal, sandwiches, a carton full of eggs, tacos, a loaf of bread, a ham, a donut, a pumpkin, a banana, a milk carton, bacon, a turkey, cheese, a hotdog, a few strawberries, a cake, some more noodles with a meatball, half of an apple, a tomato, two oranges, some pretzels, a few French fries, spam, a plum, a slice of chocolate cake, a slice of pumpkin pie, a speared olive, scrambled eggs, a mushy brown substance (presumably beans), probably poison, (put in by the cute army) and a large tortilla-bread piece to wrap around it.

a ball of yarn

a glass of lemon juice

a loaf of bread

A bowl of cereal /w spoon

a forkful of spaghetti w/ fork

and a large burrito wrap

Jake hugging the everything burrito 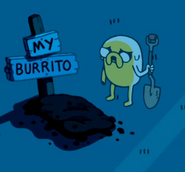 Jake has buried the Burrito
Add a photo to this gallery

Add a photo to this gallery
Retrieved from "https://adventuretime.fandom.com/wiki/Everything_Burrito?oldid=811092"
Community content is available under CC-BY-SA unless otherwise noted.