Seo Kim
Somvilay Xayaphone[2]
"Everything's Jake" is the eighteenth episode in the sixth season of Adventure Time. It's the one hundred and seventy-forth episode overall.[3]

Magic Man causes Jake to transport to a new world, to unlock his feelings deep inside.[4]

The episode begins with Jake knitting. A fly appears, landing on his head. It then becomes apparent that the fly is actually Magic Man in disguise. He is holding a syringe. Magic Man injects Jake with something and sings the following:

"The waffle doll shall fall

Lest you eat the yellow dough."

Magic Man then flies away. Jake immediately feels tired and lies down. He also feels hungry and thinks about getting a snack before he falls asleep. Jake's face then sinks into his body.

Jake wakes up in a world that is made up of his own flesh. He suggests that there must be a city somewhere, and one appears, rising out of the ground.

As he enters the city, inhabitants start to emerge from the ground and everyone starts to greet Jake as an old pal. Jake greets everyone back. He comes near a shop, which contains some dolls. He thinks about what his kids are going to eat for dinner, and the ground begins to shake. Jake dismisses it as some kind of "Jake Quake." He then is greeted by another citizen, but Jake can't recall his name. He introduces himself as Goose and says he hasn't seen Jake in about two or three years. They have a small chat and laugh. He takes Jake with him, saying everyone's waiting for him at a party. Jake follows him to the party.

When Jake gets to the party, everyone is happy and having a great time. Inside the house where they are partying, Jake is enjoying himself as Goose hits his jowls and entertains Jake. Goose then asks Jake about the five bucks he still owes him. Jake cannot remember anything about it. Goose tries to jog his memory, suggesting Jake used the money to buy a cheeseburger cheesecake. This causes another Jake Quake. Goose dismisses it and tells Jake to forget it. Jake says he is feeling hungry, so Goose says he will get him some nachos. Jake hungrily bites into them but cannot eat them since it is his own flesh. He again thinks about food and sets off more Jake Quakes.

Soon, a messenger from the Mayor arrives at the door and tells Jake that the Mayor has called for him. Jake asks the messenger to lead the way. Out in the Tree Fort, where Jake is slumped inside his body, Finn asks Jake whether he likes cereal in his cake. Jake does not respond, so Finn leaves him be.

Inside, Jake has reached the Mayor. The Mayor thanks the messenger for bringing Jake and tells him to go. The Mayor then tells Jake that the city's top scientists have noticed an exponential increase in seismographic activity since his arrival. Jake wishes to meet these scientists, so the Mayor introduces him to them. They say they want to perform some tests on Jake to find the reason behind the quakes. Jake says he has it figured out, telling them the quakes are caused by his hunger. He proves it by asking the scientists to name a food. As one says "omelet", Jake's stomach begins to growl and another quake occurs.

Jake's theory is proved correct, as another quake makes some machinery collapse. The scientists analyze and share their views. Jake says it will be over once he has some food from the outside. The scientists don't think this is true, but agree to let Jake try out his idea. A voice from behind objects. Dr. Erik Adamkinson says if Jake goes to the outside world of Glob, as they say, his flesh will reconfigure, killing everyone in there.

The other scientists dismiss his crazy theory, but Dr. Erik says that they shouldn't take chances and advises them to imprison Jake. The Mayor listens to Erik's theory and orders the guard to seize Jake. Jake is then put in a tiny cell guarded by two guards. Jake thinks of bagel, and another quake occurs.

Elsewhere, Dr. Erik is planning to go to Jake's "Glob World" to retrieve some food and end these quakes once and for all. He says he will go through the famous "Sky Hole" and get some food for Jake. As he is about to leave, his dad tries to stop him, saying he wants to come along. Dr. Erik tells him no, saying it is too dangerous and that his mind is unprepared.

He climbs up a mountain and hitches a ride on a passing balloon, which guides him to the sky hole. On the other side of the hole is the Tree Fort. He sees a bear and a rabbit in a movie projected on a screen by BMO. He mistakes them to be the Globs, saying they are just as he envisioned. He asks them for food. They don't respond, and he comes to a conclusion that they aren't the real Globs. Suddenly, Finn pops up with a mouth full of spaghetti. This causes Dr. Erik to cry, as he didn't think the Globs would be this ugly, and he then gets absorbed into Jake's body. Finn, who didn't notice Dr. Erik or at least didn't acknowledge him, tells BMO to resume the film.

Inside, Jake is thinking of food and causing greater quakes, which scares the citizens. Suddenly, Goose appears and starts smacking his jowls together, which grabs the attention of the guards, who abandon their posts and go over to him. Goose knocks them unconscious and goes to help Jake escape. Jake hesitates, knowing that this will cause him to die. But Goose then says he will forget about the 5 bucks he owes him if he goes out to his world. He smacks Jake with his jowls and tells him to go eat.

Jake obliges, and the city is absorbed into his body as he stretches his way out through the hole.

Finn finds Jake in the kitchen of the Tree Fort, eating a can of beans and staring into the distance, and asks if he's okay. A single tear falling from his eye, Jake replies "just getting a snack, Goose." 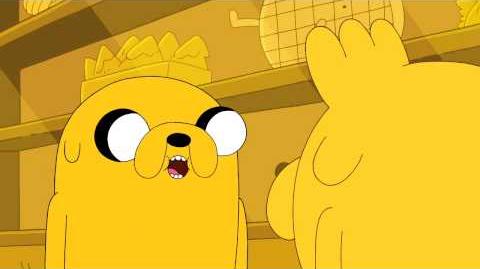 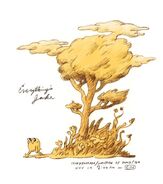 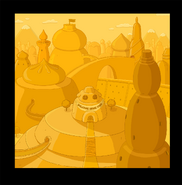 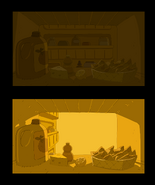 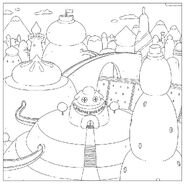