"Evergreen" is the twenty-fourth episode in the sixth season of Adventure Time. It's the one hundred and eightieth episode overall.

The story of Evergreen, and his young assistant Gunther, during the Cretaceous period, long before the Mushroom War, where they try to keep a major catastrophe from destroying Earth.

The episode takes place in the distant past long before Mushroom War. In this time, a young dinosaur named Gunther is playing with his pet dinosaur Nina. He is the badly treated apprentice to a wizard named Evergreen, whom Gunther idolizes. Throughout the episode, Gunther's idolization and wish to be like Evergreen is made very clear, which foreshadows the climax of the episode.

After their game he notices the elementals are gathering atop the tower of his master, Urgence Evergreen, and hurries to see the meeting. There, Evergreen meets with a group of Elementals. The four elementals are Ice (Evergreen), Candy (Chatsberry), Fire (Balthus) and Slime (Slimy D). They meet to talk about an incoming green meteor set to hit Ooo filled with evil magic. The other elementals do not worry about it, but Evergreen insists that they must act by creating a magical crown that will grant the wearers innermost wish. Evergreen states that he must wear the crown, because his deepest wish is to destroy the comet. The other elementals are against this, as they believe that the crown will corrupt Evergreen. Evergreen then fights the other elementals and ends up freezing them. After the battle, Evergreen summons Gunther, telling them that they will go on a mission to recover the missing piece to his crown.

Evergreen and Gunther then go on a quest where Evergreen rides an ice palanquin and Gunther walks alongside pitifully, carrying a large pack. His request to ride with Evergreen is completely ignored, an example of the constant abuse Gunther suffers at the hands of Evergreen. Their goal is to get the enchanted ruby eyes of the ancient lava dog, Magwood, which will be the source of the magical crown's power. When they arrive, Evergreen orders Gunther to stay outside Magwood's cave while he retrieves the gems, but Gunther worries for his master and enters the cave anyway in time to see Evergreen trapped by lava and about to lose. Panicking, Gunther slips and shatters his pack, which provides the necessary distraction for Evergreen to recover and defeat Magwood. Nevertheless, Evergreen harshly rebukes Gunther.

Later, back at Evergreen's lair, the crown is complete and ready to use. The comet's collision is imminent and Evergreen is about to try to use it to save the world, when Magwood arrives and attacks his castle. The fight renders Evergreen trapped under ice away from the crown, so he instructs Gunther to wear the crown while thinking of his deepest wish: to save the world and stop the comet. However, as we have seen throughout the episode, it is clear that Gunther's only wish is to be like his master Evergreen. When he wears the crown, the magic morphs him into a version of Evergreen with similar features, like white hair and a long nose (features that are shared with the Ice King). Gunther's transformation shows the horrible way he is treated by Evergreen, as he shoots ice magic and screams 'Gunther, no!' interminably. Evergreen tries to tell Gunther to use a spell to focus on the comet instead only to realize too late that he never taught the dinosaur any spells.

Just as the comet is about to crash, Ice King wakes up and we realize this was a recurring dream that the Ice King has. He wakes up screaming 'Gunther, no!' as Gunther had after his transformation, then mimics a large explosion, indicating the end of Evergreen and Gunther's story. Ice King then wakes up and sees the penguin Gunthers cowering in fear in the corner where he asks if they have the same recurring dream.

The episode closes with a look into the sky and a far away blue comet hurtling towards Ooo, similar to the green comet that was shown in Ice King's dream. 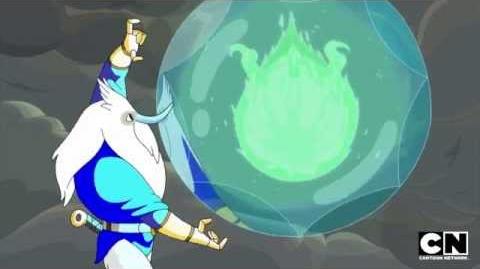 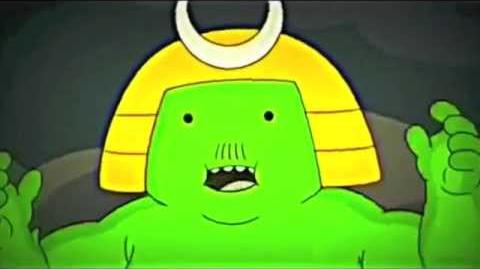 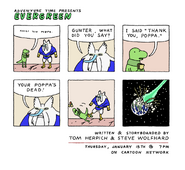 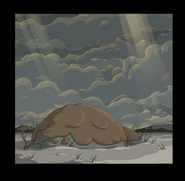 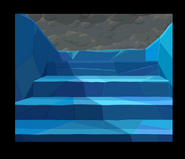 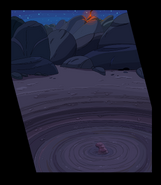 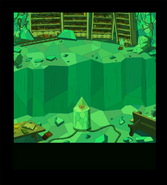 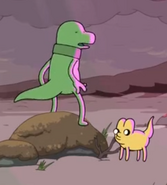 The comet will crash...