"Princess Day"
Embryo Princess is a princess who briefly appears in several episodes. In "The Lich", the gem from her crown is taken by Finn and Jake with a pair of tweezers as she sleeps, to unlock The Enchiridion. She apparently has some sort of telekinetic power that enables her to create a bubble around her, which resembles an amniotic, sac-like ball. According to the events in "Princess Day," she is a registered princess. So far in the series, she does not have any speaking roles.

Embryo Princess resembles a human fetus. She wears a golden tiara with a magenta stone in it, similar to the tiaras of Princess Bubblegum, Slime Princess, and Princess Princess Princess' monster head. She does not seem to have any clothes on, and her purple veins are visible through her skin. She also has a pink, jelly-like bubble surrounding her body. Her current design is different than in her first cameo. 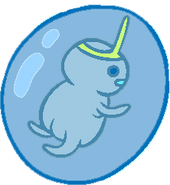 Embryo Princess from "What is Life?"

Embryo Princess to the right of Ice King

Embryo Princess on her "cell "phone 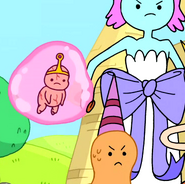 Embryo Princess with the other princesses and Gunter 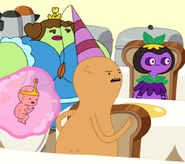