Adventure Time Wiki
Register
Don't have an account?
Sign In
Advertisement
in: Species, Elementals, Groups and organizations,
and 2 more

The Elementals are the embodiments of the four elements — fire, ice, candy, and slime. Aside from these four, there is also a fifth "anti-elemental," whose element is known as the lumps.

According to Patience St. Pim, ever since life began on Earth, there have always been embodiments of the four elements. Across eons and millennia, the four elementals lived, died and lived again.

During the age of dinosaurs, an ice elemental named Urgence Evergreen created a magical crown that will grant his inner wish to destroy an incoming comet. Evergreen calls a meeting with his fellow elementals to discuss his need for them to activate the crown's power. The three other magical beings refuse as they see a flaw in Evergreen's plan if his true wish is not the destruction of the comet. This forces Evergreen to freeze his fellow elementals before seeking out three magical rubies which happen to be the eyes of a fearsome magma beast in order to power the crown. Evergreen is joined in his quest by his hopeful apprentice Gunther, a mutated therapod dinosaur who is more like a slave than an assistant.

During the fight between the magma beast, Evergreen is nearly killed, but Gunther manages to distract the creature, allowing Evergreen to defeat it and secure the rubies. Despite this victory, he berates Gunther for not staying outside as instructed. In Evergreen's lab, the crown is completed with Evergreen adding a bonding spell so that the mind of the first possessor would be forever imprinted on the crown. But before he could use it, the blinded magma beast bursts into the room and Evergreen ends being incapacitated from part of the structure collapsing as the comet approaches. Evergreen is left with no choice but to have Gunther use the crown in his place and have him wish for the comet's destruction. But once the crown is placed on Gunther's head, it reacts to the apprentice's desire to be like Evergreen. Gunther turns into a miniature version of Evergreen, and begins shouting, "Gunther, no!" This is due to the crown reacting to how he perceived Evergreen to be: a man who is constantly firing ice magic and ordering people around. Evergreen tries in vain to tell Gunther how to block the magic of the crown but realizes too late that he never bothered to teach his mistreated apprentice any magic. The comet impacts the world, presumably killing both Gunther and Evergreen.

Prior to the Mushroom War

The elementals of this era occasionally gather and experience visions of the impending apocalypse. Much like Evergreen before her, Patience St. Pim, the ice elemental, refused to accept their fate and attempted to convince the others to let her freeze them and wait out the cataclysm. When the others refused, Patience froze herself, indeed surviving while the other elementals perished.

Patience St. Pim is discovered by Finn, Jake and Ice King, frozen in a boat below Ice King's castle. She freezes Finn and Jake and instructs Ice King to reunite the current incarnations of the elements — Flame Princess, Princess Bubblegum and Slime Princess. Revealing their shared elemental status and powers, Patience attempts to join forces with the princesses, but they show little interest. Escaping from her clutches, Patience insists that she will make her presence known throughout the land.

Patience soon manages to unlock the full potential of the elementals with a magical spell. This works too well however, not just awakening their elemental powers but causing the princesses to be consumed by them. Bubblegum becomes a large candy being with a saccharine disposition; Patience becomes depressed and unmotivated by her failure in a dark region of ice; Slime Princess becomes a giant partying blob who assimilated other slime people into her body and Flame Princess becomes a huge dragon that desires nothing but violence. The elementals divide the world into four regions, one for each, and transform all the inhabitants into elemental versions with distorted personalities. After obtaining the magical jewels that belong to the princesses, Finn manages to reverse the spell with the help of Lumpy Space Princess, the newly discovered anti-elemental, who used her powers to restore elemental balance and turn everyone to their true selves.

The Elementals are powerful magical beings who live on Earth and each represent one of the aforementioned elements. They possess the power to generate and shape their own element in a variety of ways. However, their powers are limited by how much magic is in the world; before the Mushroom War, the elementals' powers were limited in the almost completely non-magic world as opposed to modern-day Ooo.[1] Whenever an Elemental dies, their soul is reincarnated into a new body, meaning that there is almost always a living representative for each element at any one time. The Elementals can occasionally make contact with their past lives.[2]

The fifth element, lumps, behaves as an "anti-element", and also has an associated Elemental to embody it. According to the Queen of Lumpy Space, Lumps are the subspace molecular lattice that binds together the scientific and magical forces of Ooo. More powerful than any one element, it's the force that orders reality into its true shape.

At their greatest, the Elementals can transform the world around them into more of their element, including people and even other elementals, whose personalities become corrupted by the element that absorbs them. The Candy people become creepily happy and nice. The Ice people become depressed, moody, despondent and unmotivated. The Slime people become party focused and eager to assimilate into a Slime Elemental. And, the Flame people become violent and crazy, constantly attacking each other or anyone else they see. The Lumps Elemental seems to be very self-involved, desiring recognition for who they are and for everything to be "real" and how it should be (in their view.) 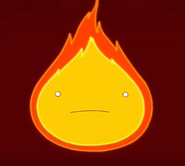 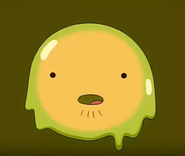 A past Candy Elemental

A past Fire Elemental

A past Slime Elemental

The Elemenals of the human era 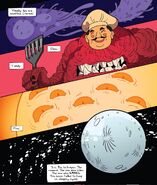