"Dungeon Train" is the thirty-sixth episode in the fifth season of Adventure Time. It's the one hundred and fortieth episode overall.

Finn and Jake discover a train where every car is a dungeon filled with a new foe for Finn to fight. Jake quickly gets bored and wants to leave, but Finn is having the best time and doesn't want to leave... ever![1]

The episode begins with Finn and Jake traveling to a mystery cave that they heard about from Flambo's brother. Finn starts asking weird questions on the way, which causes Jake to worry about him and ask whether it has anything to do with his breakup with Flame Princess. Finn tries to reassure Jake, telling him he is fine, and that he is just feeling "gray."

The two encounter the Dungeon Train while talking, and they decide to wait until the train passes before continuing on their way. Two hours later, however, the train is still passing, so Jake stretches upwards to find out that the train is circling in a loop without any sign of stopping. They both go into the train to try and pass through, but they encounter a strange-looking warrior who attacks them without warning. Finn pushes him out of the car, and they retrieve the loot that the warrior dropped, including a magical sword and his iron helm. They decide to see what else is on the train and move from cart to cart, fighting various kinds of monsters like Crystal Ants, Geode warriors, mud monsters, and slime creatures, picking up all the loot that the monsters drop along the way.

Much later, Finn and Jake have gathered a fair amount of loot, and Jake says that they should come back someday. Finn questions why they should leave (saying they have only been there for about 3 hours), but Jake replies that he is starting to get bored since the carts and monsters are all the same. Finn asks Jake to go for one more cart, and Jake reluctantly agrees. Initially, the cart appears empty. However, a big flesh-type creature appears, which Finn dubs a boss battle before rushing in to fight. The two of them defeat the creature, but Finn shows no signs of wanting to leave the train, continuously going from cart to cart. Jake tries to persuade Finn to leave by reminding him about the mystery dungeon, food, and the repetitive monsters; however, Finn does not seem to care, since the train contains greasy meat as part of the "loot," and Finn does not mind if the monsters are repetitive, nor does he care if they were in a weird dungeon or a weird train since it is all weird.

Arriving in the Ant Cart again, Jake tells Finn that "this place is bad news for you" and that they should take off; however, Finn claims that "all this feels good... like when you made those biscuits way back." Jake reminds Finn that it was just the butter he was responding to and that the train is just like that. After defeating another boss, Jake discovers a future crystal that shows Finn as an old man who continues to fight on the train after an unknown number of years. He shows it to Finn, but Finn is merely impressed by his future self, saying that he will have the best life. While Finn is fighting the Hair Apes, Jake tells him that he will leave, but secretly hides right outside the cart and sits next to a Hair Ape, who seems to be tired of fighting. Jake takes a nap but wakes up to find the Hair Ape trying to shock him.

He returns to the cart to find Finn "all souped up now" with a spider wand, an orange flamberge, a large flame coat, and an iron mask. Shocked that he became one of the "twisted-lost-soul boss guys," Jake decides to force him out of the train. Finn uses his spider wand to defeat Jake and steals his backpack. While looking inside, he finds the future crystal and uses it to see the future. This time, however, it shows an old Jake loyally following Finn around even after all those years. Deciding to set things right, Finn returns to Jake. Jake apologizes and says that he will stay on the train with him, but Finn apologizes as well, saying that "its all over now." Jake believes that they are getting off the train, but Finn tells him that he will go back in about a week or two. Jake gets worried that Finn is still obsessed with the train, but Finn reassures him that he has learned his lesson and gives him the future crystal, which now shows the two back at the Tree Fort washing dishes together. 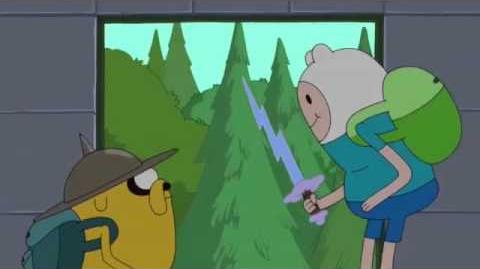 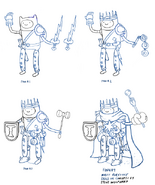 Old Finn in the future

Finn's hair, shorter than in the last episode