Finn descends into a dungeon in hopes of finding adventure, but ultimately finding various obstacles that better fit being handled by Jake than himself alone.

Finn and Jake are first seen being deposited on a mountain top by a swan driven by Princess Bubblegum. The princess instructs them to put up warning signs around a well that holds an entrance to a dungeon, then departs on princess business. After the heroes finish putting up the signs and Jake prepares for lunch, he tells Finn a story about the Crystal Eye hidden inside the dungeon. Finn, filled with excitement, prepares to enter the well, but Jake taunts him about being useless without him. Finn bets that he can get through the dungeon alone and jumps in the well, leaving Jake to finish his lunch.

Inside, Finn happily traverses through rooms containing monsters, traps, and chests. Eventually, he runs into the Demon Cat who attacks and cuts up his shirt. The cat, however, runs off upon smelling Jake's dog scent on Finn. Miffed that his friend is still somewhat helping him, the boy carries on. Coming up to a locked door, Finn tries to imitate Jake's Key Hand but has no luck. He notices the key through a small tunnel, but discovers it is inside a green jelly cube. Being unable to get the key, Finn tries to keep upbeat but falls through the floor into a waterfall cavern. There, he is confronted by the Bucket Knight, whom Finn taunts before moving ahead. The knight, however, pours water on himself to swell him and he chases Finn. The two battle slightly but Finn escapes.

In the next area, Finn runs into the Demon Cat again, who overheard Finn stating Jake is not here. The boy hides behind stalagmites while the Demon Cat attempts to locate him.  Finn is frightened that if he is caught, he should be eaten. When it seems Finn is doomed, a glowing woman with wings and a white dress appears in front of Finn, claiming to be his Guardian Angel. She carries Finn away into the dungeon and heals him completely of his wounds and scratches as well as repairing his clothes. As Finn is lured into feeling secure, she reveals she will eat him and shows her disfigured face. She drops him into a cage filled with green broth, bones, and vegetables before lighting a fire beneath it. Deflated, Finn admits he needs Jake. Jake is then revealed to be in the cage too. As the friends reunite, Jake explains how he went into the dungeon looking for Finn, but kept running into frustrating challenges that Finn could easily overcome. With new found respect, the two break out of the cage and send it falling onto the Guardian Angel.

Planning on completing Finn's bet, the heroes proceed to the chamber of the Crystal Eye, revealed to be a big diamond-like gem. Upon lifting it, they inadvertently unleash Eye Demons that attack them. Both are unable to defeat them, and it seems they shall be killed. Princess Bubblegum then appears, destroying demons with her Swan's laser ability. With the three safely on the swan, the demons are chased back under the Crystal Eye, which is placed back over them. However, Princess Bubblegum scolds Finn, while the two accept they learned their lesson: they are better as a team. Princess Bubblegum is not happy with their answer, but accepts Finn's hasty answer that she is an intelligent princess. The episode ends with the three blasting a hole out of the dungeon and flying away on the swan. 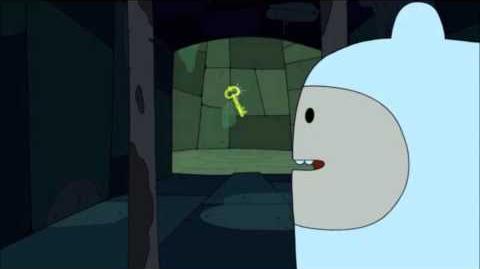 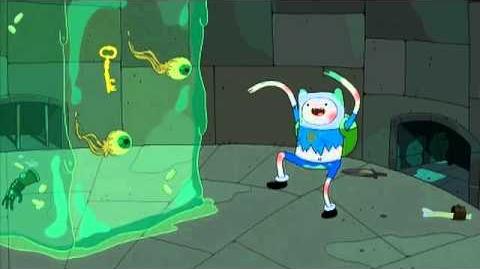 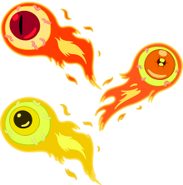 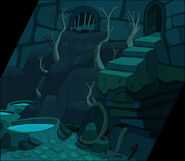 Evil creatures in the Dungeon 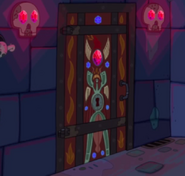 The door to the Crystal Eye