Steve Little
Tetsuo Goto (Japan)
Yuval Segal (Israel)
The Duke of Nuts is the ruler of the Duchy of Nuts. In "The Duke," he is falsely accused of turning Princess Bubblegum green and mostly hairless. Princess Bubblegum claims that he's a bad guy, which causes Finn and Jake to chase him. Fortunately, he is actually a kind guy with a secret. He has a rare condition that makes him have a pudding deficiency. This causes him to constantly eat pudding from Princess Bubblegum's pudding pantry, which is why she hates him. Finn tells Princess Bubblegum about the Duke of Nuts' deficiency, but she doesn't believe him. He is shown to have suffered a "pudding overdose" before. His wife is the Duchess of Nuts, who initially believed that he had gone rancid due to the false accusation. He has a son, the Marquis of Nuts, who seems to be willing to do anything to save his father from death. In "Henchman," he is throwing a birthday party for another son. He has an uncommonly high pitched voice for a grown man.

He is among Princess Bubblegum's allies in "Come Along With Me," implying she may no longer hate him and is shown to be briefly knocked down during the final battle. However, he soon recovers and is seen singing along with everyone else in an attempt to defeat GOLB.

The Duke of Nuts is a humanoid which has a head shaped like a walnut. He also wears a late Medieval, European outfit with puffed shoulders and breeches (similar to Finn's lute suit). It has a blue body, sky blue arms and legs, indigo padding with purple stripes, and a red cape.

As he appears in the episode "The Duke"

The Duke explaining his problem

The Duke of Nuts hiding 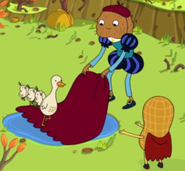 He even ate the plastic cup. 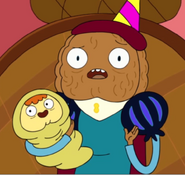 Duke of Nuts and son