Bert Youn
Somvilay Xayaphone
"Dream of Love" is the fourth episode in the fourth season of Adventure Time. It's the eighty-second episode overall.

Tree Trunks is courted by an oinking suitor, but much to everyone's dismay, their public displays of affection interfere with everyone's normal lives.

Finn and Jake are having fun rolling down a hill; they laugh happily as they reach the bottom. Finn tells Jake about all the things they plan to do which includes: getting an apple pie from Tree Trunks and listening to Princess Bubblegum's concert. They run to Tree Trunks' house to eat apple pie. When they arrive, they find Tree Trunks in the Rose garden in front of her house. They start talking with Tree Trunks when Mr. Pig, who was last seen in "Apple Thief," unexpectedly pops up and explains how he never left after the events in the episode "Apple Thief." After awkwardly talking about Tree Trunks, Mr. Pig admits his love for Tree Trunks to Finn and Jake, but then quickly gets embarrassed about it. Finn convinces Mr. Pig to confess his feelings to her. Mr. Pig then gives a dramatic love speech after Tree Trunks walks outside of her house. Tree Trunks responds by claiming she feels the same way. They then hug each other. Finn and Jake then ask Tree Trunks if she would make an apple pie for Princess Bubblegum's concert.

The scene then shifts to Princess Bubblegum's concert where she is playing her electric piano. During the concert, Jake impatiently paces on the stands while waiting for Tree Trunks to bring the apple pie that she promised to bake. However, when Tree Trunks and Mr. Pig finally arrive, she reveals that she was too distracted by Mr. Pig to make any pies. This in turn upsets Jake. Tree Trunks then starts to kiss Mr. Pig and all the spectators at the concert are disgusted by their public display of affection. Princess Bubblegum also becomes upset at their display, and claims she cannot play with them being "gross." To prevent the concert from ending, Finn splits the two apart, but they slowly move closer to each other as the music continues and start kissing again. This enrages Princess Bubblegum and most of the spectators, so Princess Bubblegum tells Cinnamon Bun to stop them from kissing, but instead, he just stops the concert and tells everyone to leave. Finn then makes the two lovers promise to keep their love hidden and they agree.

The scene then shifts to a montage of various failed attempts of Mr. Pig and Tree Trunks trying to hide their affection for one another. They attempt to hide in places such as under Finn and Jake's Tree Fort, inside a baby crib, inside a book at the Library, and inside Finn's sandwich. After finding the two lovers in his sandwich, Finn continues to explain why they cannot be together and tells them to try harder in being more secretive. The scene then shifts to a drive in movie.

The movie goes smoothly until Tree Trunks and Mr. Pig cast a huge silhouette of them tongue kissing each other. Everyone viewing the display becomes disgusted and angry. Finn decides their relationship has to stop right then and there. He splits them apart and suggests multiple options to them, but they keep coming up with excuses to his suggestions such as not wanting to hide their affection, being affectionate inside Tree Trunks' house or rushing into marriage. Finn and Jake then decide to physically split them up, resulting in the other people in the drive-through to cheer for their breakup.

Mr. Pig and Jake end up in the old tavern in the Candy Kingdom. Mr. Pig explains to Jake that he does not know what to do with his life without Tree Trunks. Jake asks him about where he lives and Mr. Pig explains that he is homeless. At the same time, Finn and Tree Trunks are at Tree Trunks' house. Finn suggests that Tree Trunks should make a pie to get her mind off of Mr. Pig. Tree Trunks and Mr. Pig then begin to sing the song "Dream of Love," which is about their love for each other. After the song, Jake and Finn, who become emotional as a result of listening to their song, tell Mr. Pig and Tree Trunks, respectively, to go find each other because they love each other. They run towards each other and embrace with a dramatic kiss near the Candy Kingdom tavern. The episode ends with various spectators becoming disgusted with their display of affection. Finn, holding an apple pie, comments about how Tree Trunks and Mr. Pig's relationship is nice. Jake sees the apple pie Tree Trunks made and takes it from Finn's hand. Jake becomes excited and said, "Apple pie, I've been waiting to kiss you all day." Jake then kisses it, getting apple pie all over his face. 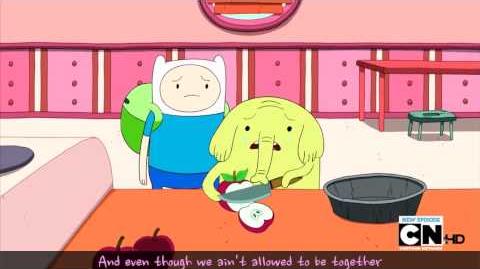 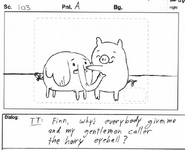