"Obsidian"
Dragons are a species of creatures that live in the Land of Ooo.

A dragon first appears in "Memories of Boom Boom Mountain" where it was voiced by Dee Bradley Baker. In the episode, the dragon complains that his bottom itches. He breathes fire and has a deep scratchy voice. The issue of his butt itching is resolved when Finn causes some Cactus Creatures to sprout. Relieved, the dragon scratches his rear-end on the cacti's thorns. He then proceeds to breathe flames, melting the Ice Cube Creature.

Another dragon appears in "His Hero," chasing the Cobbler and breathing fire at him. In "The Eyes," a dragon is shown to have been slain by Finn by being stabbed in the back of the head.

In "The Silent King," the Goblin Kingdom is revealed to have a royal dragon stable, showing that there is an entire species of dragons with the similar appearance as the ones seen earlier in the series.

Finn once again slay another dragon in "Davey."

A sub-species of dragons lives in Pillow World called a Blanket Dragon. It has made its only appearance in "Puhoy."

In "Normal Man", we see a ghost dragon on Wild Trap Mountain.

In "Obsidian", we see Molto Larvo, a lava dragon. He seems to have the abilty to grow, shrink and stretch to his own accord, elongating its mouth while breaking out of The Furnace. This species of Dragon looks more like a large salamander than a traditional dragon.

The dragon's anatomy is not consistent with most portrayals of dragons. It has two sacs on the sides of its neck which appear to be related to its ability to breathe fire, tiny wings for rear legs, a tail that splits into two and slightly curls, and a bottom like that of a baboon. It also has what appears to be a series of teats running the length of its belly, suggesting that it may be a mammal.

The dragon from "Memories of Boom Boom Mountain"

Dragon has an itchy butt.

The dragon from the episode "Davey"

Neddy from “Bonnie and Neddy” 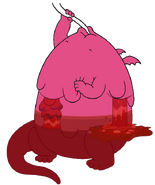