His first appearance was in "The Duke." After Princess Bubblegum is turned green and mostly hairless by a magic potion, Dr. Ice Cream attempts to treat her by putting her in a milk suit. When Jake enters the room and laughs at Princess Bubblegum, she gives him an annoyed look. When the Princess becomes distraught about the whole situation, Dr. Ice Cream tries to comfort her, saying that she will return to normal in five days. He also appeared as a train passenger in the episode "Mystery Train," in which she was one of the last candy people to be "murdered." He appeared in the episode "Mortal Recoil" where he attempted to revive Princess Bubblegum after a near-death experience. He also appeared in "No One Can Hear You," where he was one of the candy people in the crowd at the beginning of the episode. His latest appearance is now in "Hug Wolf," as one of the victims and one of the Candy People to support Jake about killing the Alpha Wolf. 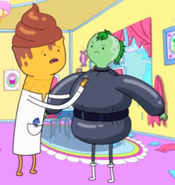 Add a photo to this gallery
Retrieved from "https://adventuretime.fandom.com/wiki/Dr._Ice_Cream?oldid=793625"
Community content is available under CC-BY-SA unless otherwise noted.