Lennon Parham [1]
Dr. Gross makes her first appearance in "Preboot." She creates hybrids of organisms, presumably her work is the opposite of extinction. Upon observing Susan's head implant, she seems intrigued, then surprised as she reads its serial number. After being restrained, Gross offers to tell Susan everything, but Susan flees without listening. The episode "Hide and Seek" revealed that she used to be a teacher for Kara (later Susan Strong) and other Seekers when the Seeker program was active.

After Martin Mertens seemingly disappeared from the island after bypassing the Guardian with Minerva's son, Finn, Dr. Gross sent her best seeker, Kara, to find and bring both of them back. While Minerva struggled to cope with the sudden loss and apparent betrayal of her son and husband, Dr. Gross began to conduct strange experiments in her lab, eventually releasing a deadly virus into the human population by accident. Her experiments lead to the permanent extinction of all Helpers. After Dr. Gross fled the island, Minerva chose to upload herself into the island's mainframe in order to restore order. 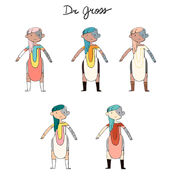 Dr. Gross from the flashback