Steve Agee[1]
Door Lord is a character who first appears in "What Was Missing." The Door Lord seemingly tries to get people to learn that friendship is the most valuable possession a person can have. He does this by stealing other peoples' prized items and forcing them to team up to recover them. Princess Bubblegum once had them locked away, but they escaped since they were able to open door-like portals.

In "What Was Missing," the Door Lord steals Finn's precious wad of Princess Bubblegum's hair, Jake's baby blanket, BMO's game controller, a little kid's toy train, and Princess Bubblegum's rock t-shirt given to her by Marceline. To recover their possessions, Finn, Jake, PB and Marceline spend the majority of the episode trying to figure out how to open the large door that the Door Lord is hiding behind. When the group finally succeed, they corner the Door Lord, who is eating a sandwich, in a room paneled with drawers of objects. Despite understanding the Door Lord's explanation for stealing their stuff, they beat him up and leave him tied up in his lair.

The Door Lord has the ability to instantly create doors to take him places, as seen in "What Was Missing." He appears through a door he created and later leaves through another door. When he creates a door, he does so by throwing a small key at whatever place he wants the door to be appear. Each door appears on the spot, unfolding quickly, and the doors can appear floating in the air and/or tilted, and still function. The Door Lord also seems to have the ability to open any door that is already made. He can also jump very high to reach his doors, which Jake acknowledges by saying, "That guy must do crazy squats!"

The Door Lord looks very similar to Key-per and Booko, having the same skin color, big cheeks and blue hat with a strap, but is much taller and has more muscle mass and his chest is sunken. He has multi-jointed appendages, allowing him to move and bend in abnormal ways. His legs bend backward then forward, like a deer or horse's hind legs. He has four joints in each of his arms, not including his fingers or shoulders. He has large pecs and seems to have visible ribs.

The Door Lord also wears a small door attached to his hat, which is similar to the way Key-per wears a key on his head. He wears no clothes. He does wear a bright blue cylindrical knapsack and string of keys across his chest.

Door Lords maintain a vow of silence and do not speak. However, Door Lord mumbles in response whenever he is addressed, but his mouth never opens and his voice is muffled beyond comprehension. Sometimes what he is saying can be translated, as when he was asked who he was, and seemed to hum, "I'm a Door Lord!" Marceline and the others in the group were somehow able to understand what he was trying to explain near the episode's end, though they may have been guessing correctly instead of directly translating his muffled words. 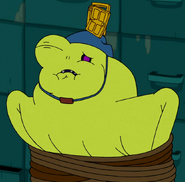