Ruler of the Desert Kingdom

In Issue 2, Desert Princess states her earliest memory is being sucked up by the Lich's Bag of Holding while near the Candy Kingdom. It is heavily implied, through her own words, that she was created when multiple Candy People got mashed together and formed a new consciousness. Waking up in the desert, she simply assumed that she must be a princess and the desert was her kingdom. Of course, this does not explain her ability to control sand.

Her head is a large cake on its side with vanilla frosting and pink icing. She wears a crown that is made out of ice cream with a cherry on top of it. Her body is an upside-down ice-cream glass, and is small compared to her head. Her arms and legs are orange and she wears a pink cape.

Desert Princess has a kind, shy and quiet personality. She also may have a crush on Finn, as all her sand clones admitted to it, much to Desert Princess' denial and embarrassment.

She has the ability to shape sand into people (or animals) and make it into a living thing. She does this by yelling "Psammo!," which is a hommage to the Psammead, a wish-granting "Sand Fairy" in E. Nesbit's children's book Five Children and It.

She is very skilled at doing sand constructions. 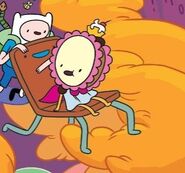 Desert Princess and our heroes celebrate the birth of her new kingdom in The Land of Ooo.
Español
Community content is available under CC-BY-SA unless otherwise noted.
Advertisement