View source
watch 01:33
Wiki Targeted (Entertainment)
Do you like this video?
Play Sound

Derek David Drymon is an American comedian, voice actor, television writer, storyboard artist, and animator who is well known for his work on Rocko's Modern Life and SpongeBob SquarePants. He brought his trademark sense of humor to Adventure Time, on which he served as Executive Producer alongside Fred Seibert for the show's first season. 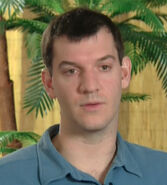