Clancy Brown
Demon Cat is a character that appears in the Adventure Time episode "Dungeon".

The Demon Cat is a large, teal, cat-like creature, with razor sharp teeth and retractable claws. He has yellow-green eyes with pinkish-red pupils. He has a pair of very short teal-colored ears, resembling those of a house cat. Small sections of his right foreleg and hind leg are invisible (or non-existent), and his tail seems to be made of maroon tentacles that extend from his body. He has small magenta bumps that come out various places on his back and chest as well. The Demon Cat can create a lure from his mouth that resembles the head of a kitten. He can also turn his kitten tongue upside-down.

The Demon Cat seems to take great pride in his "approximate knowledge of many things," meaning that he "kind of knows things." Examples include almost knowing Finn's name (calling him Frank), And later calling him Jim, knowing where Finn "might" be hiding, and referring to Jake as "Jack." The Demon Cat also seems to enjoy toying with and tormenting his victims, announcing his intentions, movements, and plans to Finn while searching for him. The Demon Cat speaks with a creepy yet calm voice. His eyes also turn red, possibly due to them swelling up with blood, when he gets angry.

It is somewhat unclear if he hunts for food, pleasure, or as a guardian in the dungeon. He claims throughout the episode that he will eat Finn's eyes, skin him, and tear out his heart (among other things). He has a very sadistic personality.

The Demon Cat is unafraid of adventurers such as Finn, but is terrified of dogs, running away from the mere smell of Jake.

The Demon Cat is first encountered by Finn near the beginning of the dungeon, where he engages Finn in combat. Finn punches him in the face, enraging him and causing the yellow sclerae in his eyes to turn blood red. He easily beats Finn in single combat, only to suddenly retreat when he notices Jake's odor on Finn.

After escaping the Bucket Knight, Finn lands in the Demon Cat's lair. Awaking to Finn complaining that Jake is not accompanying him, the Demon Cat decides to resume his attack. Finn is forced to flee from the Demon Cat and hides in a nearby cavern. Using his knowledge of "exactly where Finn might be," the Demon Cat begins searching for Finn. Fortunately for Finn, the Demon Cat's approximate knowledge is unable to pinpoint his exact location; although, with the limited number of hiding spaces within the cavern, Finn seems doomed. Only through the arrival of his "Guardian Angel" is Finn saved from the Demon Cat.

The Demon Cat with red eyes

"I have approximate knowledge of many things." 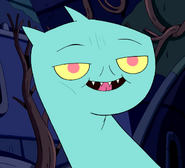 "I'm going to unzip your skin and wear you like a little coat." 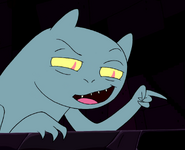