"Together Again"
The Demon Blood Sword (also known as Demon Sword ) was formerly owned by Joshua. It is Finn and Jake's family sword, and was the prize at the end of Joshua's dungeon, which Finn and Jake were sent to explore in the episode "Dad's Dungeon." It is made out of Demon blood, as explained by Joshua in the hologram video that he made for Finn and Jake for future viewing. The sword has a Celtic cross on the guard. It was found in the last chamber of the dungeon, where Finn uses it to defeat the Evil Monster. It was locked up with chains and stuck in a formation of blue and green crystals when Finn found it; the key for it was around the monster's wrist. Instead of defeating the monster to get the sword, Finn ripped it from the crystals, breaking the chains, and subsequently used the sword to defeat the monster.

The sword's creation was shown in a videotape in "The Pit," where Kee-Oth created it from his own blood after being captured by Joshua, as a way to escape. When Kee-Oth tried to steal Joshua's blood, he was stunned by holy water that Joshua had been drinking, which infused his blood with elements dangerous to Kee-Oth. Kee-Oth attempted to escape, but Joshua threw holy water at him and took the sword, apparently warding off several attempts by Kee-Oth to reclaim his blood as seen in his holo-message to Finn and Jake.

Before it was snapped in half by Finn in "Play Date," the Demon Blood Sword was in perfect condition, and was almost entirely bright blood red in color, except for the brown leather grip, and white spike on the end of the handle's pommel (possibly a claw or horn). The white spike also seemed to have a miniature red cross on it. Strangely, the guard of the sword is shaped like a Celtic cross (ironic, due to the sword being made of demon blood), with the handle of the sword being in place of the top part of the cross, and the actual blade in place of the bottom, or longest part of the 'cross'. The handle of the sword is also rather long, though the sword still looks balanced. Out of the five main swords Finn has used in the series, the demon blood sword has been used for the longest amount of time.

This sword replaced the Root Sword that Finn found in "Mystery Train." Finn used this sword for the first time (not counting "Dad's Dungeon") in the episode, "Return to the Nightosphere." It seems that the design for the sword was changed in some episodes; the tip of the handle changed from red to white.

Even by sword standards, the blade itself has shown an immense amount of strength and durability. This was demonstrated in "Dad's Dungeon" when Finn used it to stab and lift the Evil Monster (who should have weighed at least a couple tons) off the ground and toss the monster into a pit, and the sword did not bend in the slightest. In "Return to the Nightosphere," the sword was shown to easily resist the energy beams Marceline creates when in her 'blood mist form', despite the beams' ability to destroy or transform near anything they hit. In "Vault of Bones," the sword was shown to be fireproof, as Flame Princess was able to wield it without consequence. This durability may have been attributed to the fact that it is made of demon blood.

Finn ultimately destroys the sword in "Play Date," breaking it over his knee when Kee-Oth returns and threatened to kill Ice King and Abracadaniel if his blood was not returned. When the sword snapped, Kee-Oth absorbed his blood, leaving the sword halves drained and a dull grey color.

Finn makes a replacement sword in "The Pit" to trick Kee-Oth, which is made of frozen grape juice blessed by Shelby in his priest outfit. The original blood sword remains gray and broken at this time and would likely need a new demon's blood to be restored, with Kee-Oth having been destroyed. It was replaced by the Grass Sword in "Blade of Grass."

The sword makes a brief appearance in "Together Again" near to the door of Joshua and Margaret house in the 45th dead world. 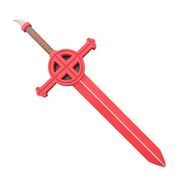 Joshua seen holding the Demon Sword in a Hologram 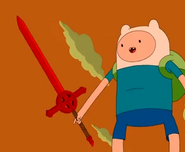 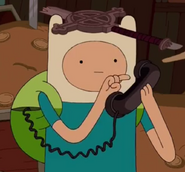