"Death in Bloom" is the seventeenth episode in the second season of Adventure Time. It's the forty-third episode overall.

After killing Princess Bubblegum's Princess Plant when left to take care of it, Finn and Jake have to go to the Land of the Dead in order to get its soul back.

The episode begins with Princess Bubblegum asking if Finn and Jake will take care of her Princess Plant while she is away at the Science Conference in Veggie Village. She tells them she will be back "on the Morrow," then screeches to summon a giant eagle-like bird to carry her to the conference. Finn and Jake take horrible care of the plant, shoving cookies and pizza into its soil and flowers, not watering it, and accidentally setting it on fire while reading it a story beside a fireplace. As they say goodnight to the plant, they realize it is dead and Finn suggests they go to the land of the dead and reclaim its soul before Princess Bubblegum returns from the convention. Peppermint Butler overhears this and offers to open a portal to the Underworld for a small price "which they can discuss later" which they agree to.

As Finn and Jake go through the portal, Peppermint Butler tells them to say "hi" to Death for him, trying to warn them not to drink the water, but is unable to finish before the portal closes. After viewing the terrifying environment of The Land of the Dead, Jake offers to carry Finn in his paunch while he stretches them down to the ground, but they spot an escalator instead, and they both escalate down to the entrance. Finn and Jake then run into a gatekeeper who admits people to the land of the dead. Not believing their cause of death ("because we're awesome"), the gatekeeper tells them to step out of line, but Finn and Jake walk past him, which the gatekeeper is unable to stop. Next, Finn and Jake come across skeletons that try to kill them for their flesh. Finn and Jake try to fight them off in vain, when Jake enlarges and says "I'm not a banana!" the skeletons are shaken off for a while. They are able to put themselves back together when knocked apart. Finn and Jake run away and hide in a hole from the skeletons, troubled at their slow progress at getting the Princess Plant's soul back, but Finn is somewhat relieved by the fact that Princess Bubblegum will not return until tomorrow. Jake reveals that Princess Bubblegum's statement is that she will be back "on the Morrow" and does not mean she will be back tomorrow, but that she will be riding her eagle which is named "The Morrow," which he claims is extremely fast, and would only take them about 20 minutes to return home from the Science Conference.

Finn rushes out of the hole, sneaking past the skeletons that are still looking for them, and stops on a bridge crossing over some searching skeletons. Finn says to Jake to be very quiet, but suddenly, Jake farts with an extremely loud echo, alerting the skeletons to their position but also triggering an avalanche which double-kills them all. The last obstacle separating Finn and Jake from Death's castle is a river, which a talking skull urges Jake to drink from after he tells Finn how thirsty he is. Sensing the skull is up to something, Finn warns Jake not to drink the water, which makes the skull say "don't drink the water." Reasoning that by Finn's logic this means the water is good, Jake drinks from the river and immediately forgets who he is. Not knowing who Finn is, Jake becomes uncooperative, but since they're running out of time, Finn drags him forcibly to Death's castle. As they enter the castle, Death is tending his zen garden and notices Jake hiding behind a tree and shouts "Hey. Hey! I see you!" Jake asks for Death's name, and Death asks for Jake's name, but Jake does not know his name and asks for Death's name again, forcing Death to tell him to leave, but Jake replies that he did not know he was trespassing, leaving Death distracted as Finn jumps out and announces they are not leaving until he gives back the plant's soul and Jake's memory. Death becomes more irritated as he cannot stand Finn and Jake on his property, telling them to leave. Finn then tries to kick Death, but to no avail.

Death challenges Finn to a musical battle for the soul and memories, with Death picking a drum set with double bass pedals as his instrument while Finn picks sleigh bells. Death's performance is a death metal show complete with pyrotechnics while Finn's is simply shaking and stomping on the sleigh bells, so when they go to Jake to judge the winner he chooses "skeleton guy by a landslide." Death traps Finn in a magical barrier and informs him that the penalty for losing a musical battle is losing your life.

About to die, Finn tells Death that Peppermint Butler said hi, which makes Death release Finn and remark "What?! You know Peppermint Butler?!" and lets them have whatever they want. He restores Jake's memory with the Kiss of Death and sends the flower's soul back to its body, then transports Finn and Jake back to Ooo just in time to meet Princess Bubblegum. She eats a flower from the plant, her hairstyle magically changes, and she thanks Finn and Jake with a group hug. Peppermint Butler takes this opportunity to inform them that the payment for his services will be their flesh, to which the duo think he is only kidding, to which he tells them. As his eyes start to glow eerily, he will take it from them while they sleep. Finn and Jake's smiles slowly turn to confused and scared frowns, as the episode ends. 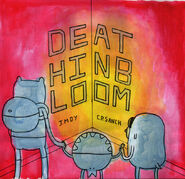 The Morrow - close up

Princess Bubblegum haircut after eating a flower from the Princess Plant

Death with Princess plant on head

Skeleton with Spear in Neck

Skeleton with Cleaver in Head

Skeleton with Knife in Head

Princess Plant with pizza and soda

The Secret Room from "The Enchiridion!"

Entrance of The Land of Dead

The River of Forgetfulness

A hole where Finn and Jake hid from skeletons 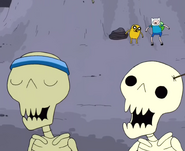 Halt visualizing where the "fleshies" are

"Mr. Finn, Mr. Jake, I believe you still owe me something in exchange for that favor I did."

"I'm going to take it from you while you sleep." 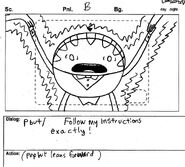 Original storyboard of "Opening the portal to the Land of Dead" 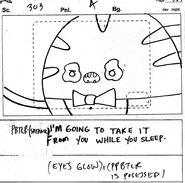