Ruler of the Land of the Dead and the Dead Worlds

Miguel Ferrer
Yoram Yosefsberg (Israel)
Death is the ruler of the Land of the Dead and the Dead Worlds who debuted in the episode "Death in Bloom". In his first appearance, Death plays the double-bass drums in a competition against Finn. He almost kills Finn, but gives back Jake's memory and the life of Princess Bubblegum's plant after Finn mentions Peppermint Butler. Death is shown to have various powers, such as the "Kiss of Death", encasing people in force fields, and sending people back to the Land of Ooo.

Years later into the future he is destroyed after being bitten by his son New Death, who took over his job and was soon possessed by The Lich. The role is then held by Mr. Fox.

Death appears to have a friendly relationship with Peppermint Butler as revealed in the episode "Death in Bloom," though it is unknown how long they have been acquainted with one another. It was at the revelation that Finn and Jake knew Peppermint Butler that Death allowed them to return to the surface, even though Finn had lost a music battle to him. According to Kent Osborne, Death had met Peppermint Butler years ago when he started dabbling in the macabre and has been friends with him ever since.[1]

Death seems to have encountered Abraham Lincoln, the King of Mars. In "Sons of Mars," he rejects Lincoln's initial offer of a penny by replying, "Not this time." He seems to have respect for Lincoln's status as a king, referring to him as "Your Majesty."

Death is dating Life, and has a child with her in the future (see New Death)

As a cosmic entity and the overseer of the Land of the Dead and the Dead Worlds, Death has a wide range of incredible powers and has complete control and authority over his realm and the powers within it. In addition to his natural abilities, Death is a skilled drummer and bassist. His genre seems to be death metal, a pun on himself. Some of his abilities include the following:

Some concept art, reinforcing the fact that Death was originally meant to be a Japanese cosmic alien (hence the Ultraman villain look) 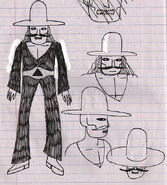 Death on the drums 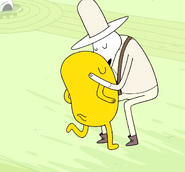 Death returns the soul of the Princess Plant.

"Not this time, Your Majesty."

Doing the "Kiss of Death" in Finn & Bones