Steve Wolfhard
Adam Muto
"Daddy-Daughter Card Wars" is the eleventh episode in the eighth season of Adventure Time. It's the two hundred and thirty-sixth episode overall.[2][3]

Jake needs his daughter Charlie's help in an underground Card Wars tourney to move on from his embarrassing past.[4]

The episode begins with Jake, Charlie, and BMO sailing on an ocean. Charlie shows her cards to BMO for entertainment, afterwards Jake ask Charlie about his cards from Card Wars. Charlie becomes confused, and BMO jumps off the boat out of resentment for the game. Jake attempts to rescue it, but decides to disregard it out of fear for being late to the tourney.

He then clears up Charlie's confusion with the game, by explaining to her a brief synopsis and the mechanics of the game. This causes Charlie to become uninterested; she does not involve rules with cards. Jake then attempts to convince her, leading to a wager of one of his bones for one game.

The two arrive at the tournament, which is inside an abandoned oil rig. Upon entering, and greeting an usher, Jake introduces the contestants to her. They eventually encounter the reigning champions, Grand Prix and Moniker. Jake reunites with the two, introducing them to his daughter. Jake dismisses himself, and Charlie teases Jake about his love interests.

Jake and Charlie enter the first round, and they win one game. Charlie announces her departure, leaving Jake confused until she brings up her previous deal: one bone and one game. Jake tries to offer her all his bones to persuade Charlie to continue, but she rejects the offer, telling him that she only needs one. As Charlie departs, Jake decides to continue the tournament, using his stretchy powers to fake Charlie's continued presence. Grand Prix and Moniker indicate to Jake that they know he's lost his partner, but they're willing to keep his secret. Jake is unmoved by their generosity.

Meanwhile, Charlie leaves the oil rig, growing to gargantuan size in order to quickly cross the globe and return to her home in an Egyptian pyramid. Once home, Charlie starts to perform a ritual, using the bone Jake had given her, some hair from Lady Rainicorn, and some cards.

At the tournament, Jake faces a possible defeat from his opponents. He decides to force a draw, which will allow him to continue in the tourney, much to the audience's dismay. Jake realizes that he is still in possession of his younger self's attitude, and runs into the restroom.

Back at Charlie's home, her ritual displays herself at intervals of ten years, beginning at her 20s. Here she acknowledges her faults of youth. She sees herself growing older and learning the lessons of age, finally ending up in her 90s, old and wise. Charlie merges with her future self, and has a sudden realization that she's been selfish to and dismissive of her father.

Back in the oil rig's restroom, Jake struggles with the temptation of his twenty year old self; he wants to rid himself of those violent and angry compulsions, but can't separate himself from his younger identity. Charlie returns as Jake struggles; she forces out Jake's immature subconscious, allowing him to move on and grow up. The two begin their battle with Grand Prix and Moniker, leading to the reigning champs coming out victorious again. Jake congratulates them, and the episode ends with him burying his "twenties." 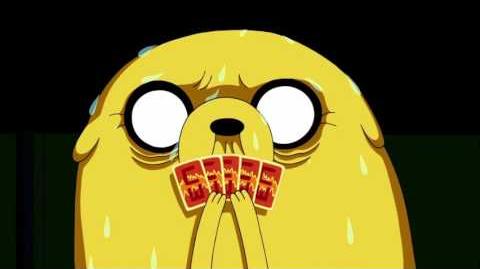