Cole Sanchez
Rebecca Sugar[1]
"Daddy's Little Monster" is the sixth episode in the fourth season of Adventure Time. It's the eighty-fourth episode overall.

Finn and Jake attempt to rescue Marceline and find out what is making her behave so strangely. This is Part 2 of a two-part episode, coming after "Return to the Nightosphere."

The episode begins where Part 1 left off, with BMO charging Jake's phone. Jake is wearing a green towel and a blue shower cap (presumably having just had the shower referred to at the end of the previous episode). The phone has finally charged, and Finn and Jake proceed to watch videos of their time in the Nightosphere. There are three videos on the phone. The first one shows Finn and Jake fooling around with the camera before entering the Nightosphere to hang out with Marceline, at her offer to come with her. The second shows a scene in which Marceline's dad flies in abruptly to tell Marceline that he wishes for her to take over the family business and rule the Nightosphere. He casually takes off and gives her a purple amulet that he says can grant wishes. Marceline refuses to take over her dad's job, and plays a short song after he leaves - Marceline plays the banjo and sings, and Finn plays a tambourine. Though she claims that she has her own plans for life, she tries on the amulet and accidentally turns herself into an evil monster like her dad. The video blacks out as a third video comes on, showing how Finn and Jake got thrown in their jail cell by the Nightosphere Jailer, who spews bananas profusely from each of his ears in a way that suggests that bananas are the equivalent of feces or vomit to demons. Jake and Finn make grossed-out faces at each other, and Jake drops the banana he has been carrying.

They decide to return to the Nightosphere to save her. After disguising themselves as demons, with Finn using a cut-up paper plate and pajamas and Jake using his stretching powers to alter his appearance and take the form of a  gross, sharp-toothed demon, they go back using the spell that Finn used to open a portal to the Nightosphere in "It Came from the Nightosphere." When they re-enter, they find themselves trapped in yet another line, but one which they believe leads to Hunson Abadeer, who is playing cruel tricks on the demons of the Nightosphere. They are discovered by the giant overruling demon when they try to cut in line, and barely escape after it attempts to eat them. They run into her house and find the Lord of Evil, the actual Hunson Abadeer, making a sandwich. He explains to them that he only wanted Marceline to follow in his footsteps and that he thinks it is great that she has been possessed by the amulet. Hearing this, Finn gets angry, slapping the Lord of Evil's sandwich out of his hands, and goes back to rescue Marceline.

Finn and Jake decide they need a way to get close to Marceline and start a political rap. Soon after hearing their song, other demons join them in the revolution to overthrow Marceline. They reach Marceline and finally manage to take off the amulet that was controlling her. However, Jake is unable to go back to the portal they created before as the demons try to eat his legs, disabling him. So Finn puts on the amulet and throws Jake and Marceline out of the Nightosphere. Unfortunately, under the control of the amulet, he tries to get Jake and Marceline back to the Nightosphere as he has become evil, but the Lord of Evil rips the amulet off Finn and puts it back on, explaining to Marceline that he is proud of her no matter what she does, and that he actually likes her friends (Finn and Jake). Marceline closes the Nightosphere portal, and after stating her surprise at her dad for liking Finn and Jake, she jokingly says she does not want to hang out with them anymore. The episode ends with Marceline asking Finn if he is okay. Finn is exhausted and traumatized after having been under control of the amulet, and does not answer. 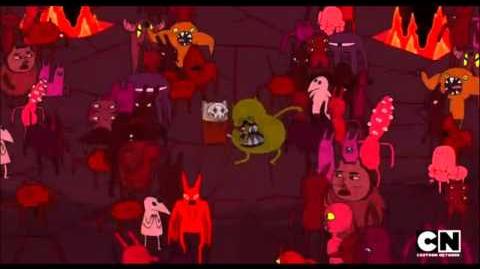 A still of the first video on Jake's camera phone 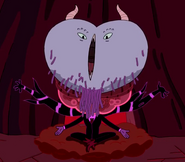 Marceline under the amulet's powers

Finn under the amulet's monstrous powers

After removing the Amulet, this turns Marceline back to normal, but unfortunately drenches the demons in black gunk in the process.

A demon is forced to vomit bananas as "weird punishment" from the amulet-controlled Marceline.

One demon requests abs from the amulet-controlled Marceline... 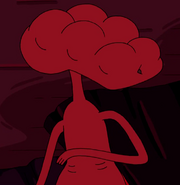 ... But receives them in the wrong places.

The demon from "Return to the Nightosphere" returns, asking for pain from the amulet-controlled Marceline...

... And nonetheless receives it. 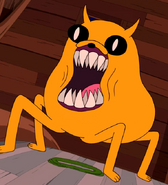 Jake purposely turns into a "grosser" demon for Finn before their journey back into the Nightosphere.

Marceline receives the amulet as a pass-down from her father.

Jake is startled when Abadeer opens his mouth as if he is sucking souls.

Abadeer is caught with his "midnight snack" as his amulet-wielding daughter wreaks havoc outside.

Finn during a camera phone tape

Marceline emerges from the portal and invites the duo.

The Nightosphere Jailer painfully pushes bananas out of his ears.

The Nightosphere Jailer continues emptying bananas from his ears painfully.

Marceline wearing a suit similar to her father's 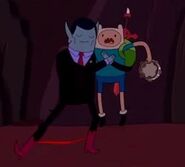 Abadeer discomforts Finn by picking him up and noting how he is not killing him.