Aziz Ansari ("Be More")
Cole Sanchez ("The More You Moe, The Moe You Know (Part I)")
DMO is a MO who appears in "Be More." It guards the front entrance of MO Co. and also operates the tram. DMO says that MO Co. was founded 1000 years ago by Moe.

In "Be More," DMO welcomes Finn and Jake (disguised as "FMO" and "JMO") into the factory. When Finn says he needs repairs, DMO brings out EMO. Finn hastily denies that he needs repairs and says he just wanted to come back to his "birthplace." DMO responds saying that 47.3% of all MOs return to the MO Co. for sentimental purposes.

DMO guides them through a "complimentary tour." A tram guides them over the derelict factory floor as DMO gives them an informative speech about the place. Jake asks why the place is so run down. DMO replies that it is not programmed to answer that question, adding that "JMO" isn't programmed to ask that question, either. Realizing he has nearly blown their cover, Jake asks what question DMO is talking about, and DMO grunts in frustration.

DMO also brings them to the core system driver installation bay. Finn jumps off to get BMO's core system driver. DMO tells them to get back to the tram. DMO then calls the SMOs. They come to shoot the intruders, and DMO's tram is knocked out of view.

Later in the episode, Finn and Jake escape from the SMOs. They jump through a ventilation grid on the floor. They land on a tram that DMO is driving. DMO gets up and yells at them to get off of its tram. Jake says, "cram your tram!" and kicks DMO off of the tram. When the SMOs drive a tram right behind the one Finn and Jake hijacked, DMO can be spotted with them. DMO does not play any other major part in the episode.

DMO enthusiastically presents the ruins of the MO Co. factory to Finn, Jake and BMO 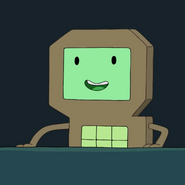