Emo Philips
Cuber is a character who speaks in the beginning and end of the episodes "Five Short Graybles," "Five More Short Graybles," and "Another Five More Short Graybles." He seems to know Finn, Jake, BMO, Tree Trunks, Marceline, Gunter, and Princess Bubblegum but calls Ice King "the blue guy" and Lumpy Space Princess "the other thing." As revealed in "Graybles 1000+," Cuber is an alien living 1000 years in the future, which was first hinted at when he said the stories seen in "Five Short Graybles" are tales from "the days of old." He speaks a variety of non-English terms (see quotes) but mostly speaks English.

Cuber's skin is light pink, and his head is significantly larger than the rest of his body. His facial features are similar in appearance to most characters', albeit spread apart across his large face, leaving him with a comically small mouth in proportion to his other body parts. He wears a little hat with a small, spinning purple cube, which in fact is a grayble for bravery, that floats next to the hat. The hat itself is a hemisphere with a small, bent rod coming from the top. The hat is the same color as his robe, which is light salmon colored. His robe has small green, mauve and light blue squares on its front top half. Its chest also has a line with many 90 degree angles that dividing it approximately down the middle. The line ends abruptly at the beginning of the bottom half of his robe, suggesting that the top and bottom halves of his robe could be separate.

Cuber bears some resemblence to the Object People Booko and Key-per, and the Door Lord, all of whom also wear unusual object-based headware. 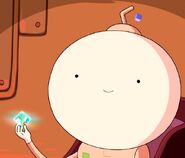 Cuber sitting in his chair