Maria Bamford
Cubby is a bear from the episode "Belly of the Beast." He is the only one of the bears to notice that they are in a monster's stomach (stating it for three days straight). He is ignored by the other bears, however, because he is just a kid. He is the smartest and most paranoid of all the bears at the supposedly never-ending party. In "Belly of the Beast," Cubby tells Finn and Jake that if they want the bears to leave the monster's stomach, they have to talk to Party Pat, who is the leader of the bears.

Cubby is a small bear with large eyes. Cubby has dark brown fur and light brown eyes and belly. He also has a picture of a wedge of cheese on his belly. Cubby doesn't look like most of the party bears. He appears to have a different body, such as his size and design. 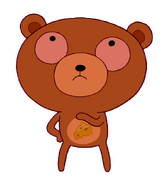 Cubby with Finn and Jake