Jesse Moynihan
Sam Alden
"Crossover" is the twenty-third episode in the seventh season of Adventure Time. It is the two hundred and twenty-second episode overall.[2]

Finn and Jake walk through a blizzard of a snowy wasteland towards a large ice mountain, and when the two climb it, it is revealed to be a large structure made out of blocks of frozen humans. At the center view of the structure, the two see a large green, a glowing pit with Farmworld's Enchiridion floating over it, and a frozen human Billy next to it. Farmworld Finn soon arrives with the frozen block containing his family and cheerfully puts it into the structure, gleefully saying that they'll be coming with him to a new world. As he celebrates his success and magic power, Finn pulls out a mysterious briefcase and tells Jake that this is the weirdest thing he's ever done.

A flashback to an hour before shows Finn, Jake, and BMO playing a game in their living room. When BMO wins, Prismo's pickle jar starts to glow and Finn and Jake exclaim that Prismo is calling them. They hesitate to answer, but when they see BMO is fine on its own, they answer the call and are teleported to Prismo's time room. When they arrive, Prismo asks for their help. Finn and Jake both assume that Prismo is being bullied, but he denies this and asks the two if they remember the events that occurred in Finn the Human and Jake the Dog. Jake replies that he vaguely remembers it, while Finn says that he remembers none of it. Prismo explains that Finn doesn't remember it because it technically didn't happen to him, as Jake's wish to have the Lich's wish be to bring Finn and Jake back home led to Finn never making the wish that made Farmworld. But, in some strange way, the dimension still exists and Farmworld Finn, now called "Ice Finn" has teamed up with the Lich to create a portal using magic and Farmworld's Enchiridion.

Prismo tells the two that nobody in Prismo's dimension knows what will happen if Ice Finn succeeds, but if he does, Prismo's boss will hold him and Finn and Jake (by proxy) responsible. So to fix the problem, Prismo gives the two the briefcase and tells them to use it to "take care" of Ice Finn. When Finn asks Prismo what he means by, "take care," of Ice Finn, Prismo hurriedly tells them good luck and teleports them to Farmworld.

One hour later at the top of the Ice Structure created by Ice Finn, Finn takes an object out of the suitcase reveals that it is actually a large, pink horn object called The Maid, and it is used to clean up," All class A inter-dimensional Bung-ups." The two pick up the maid and aim it at Ice Finn, and Finn states that his intention is to help make the Ice Finn feel better. Jake asks him if he is acting ignorant on purpose, and Finn answers that it is hard to "take care" of Ice Finn because he's him. Jake volunteers to do it and tells Finn to cover his eyes and ears. When he is holding the Maid and looking at Ice Finn, Jake struggles to recite the phrase. In the end cannot go through with it, and when he tells Finn this the two decide to steal the Enchiridion instead. In his time box, Prismo watches what is happening and screams at them to not walk away from the Maid.

While Ice Finn is distracted by the frozen humans, Finn and Jake sneak up to the Enchiridion and attempt to steal it, but Ice Finn notices and blasts the two away. When he sees that Finn is human, he excitedly tells the two that he thought he saved all the humans and that they will all go with him into another world. As he prepares to freeze Finn, Jake distracts him with his stretchy powers and tells Ice Finn that he is also a portal to another dimension among other things. As Jake is keeping Ice Finn occupied, Finn sneaks towards the Enchiridion and promises Billy that they'll get him out of here. Billy tells Finn to call him Bobby and warns him of someone arriving.

Big Destiny arrives with a small sac of Jewels and drops them. Following behind is the Lich possessed Farmworld Jake. When The Lich releases Big destiny from his hypnosis, Big destiny attempts to run away, but he is frozen next to the portal by Ice Finn who notices Finn stealing the Enchiridion. Finn tries to run away with the book, but is frozen (excluding his arms so the Lich could grab the Enchiridion) by Ice Finn, and when Jake tries to break him free, the Lich renders him unconscious. The Lich places the Enchiridion above the portal and Ice Finn inserts the Magic Jewels (including his own) which activates the portal.

Excited, Ice Finn asks the Lich which dimension the portal is showing and the Lich reveals that the portal is actually a portal to the Multiverse, and tells Ice Finn that wherever he will go, he (Ice Finn) will die along with his family. The Lich then tries to kill Jake with his poisonous breath, but Finn's grass sword arm activates and chops off the Lich's arm effectively releasing Jake. Jake falls next to the portal and the Lich's arm falls on top of him. When Jake pushes away the arm, it falls into the portal, duplicates, and disappears into every dimension (BMO, sitting alone at home, is stunned when the Lich's arm falls onto their dining table). Ice Finn, angered that the Lich used him, steals his crown jewels back (which deactivates the portal) and prepares to fight while Jake leaps in front of the Lich to keep him from following Ice Finn. Before he can freeze both Jake and the Lich, Grass sword knocks him down.

With the crown knocked off of his head, Ice Finn sits in the corner of his Ice Structure while regular Finn tries to tell him that they are the same person. When Regular Finn's words strike a chord, Ice Finn calls out to Bertram, his donkey that he originally wore the crown to save, and Regular Finn tells Ice Finn that there is a way to fix everything. As Jake struggles to keep the Lich trapped, Finn calls to him to get out of the way, and he and Ice Finn use the Maid on the Lich which erases him in a flash. A large column of light pierces the clouds, and the sky turns back to normal.

In the aftermath, Farmworld Jake is shown to be alright and Jake is beamed out of Farmworld. Finn tells Prismo to wait because he wants to talk to Farmworld Finn, but Prismo beams him out anyway. Feeling pity for Farmworld Finn, Finn asks Prismo to do something as Farmworld Finn will remain messed up if the crown continues to exist, so Prismo teleports the crown out of Farmword Finn's hands and onto the corpse of Simon before the bomb goes off so it is destroyed in the ground zero explosion of the mutagen bomb. As a result, Farmworld Finn reverts back to normal and finds his family thawed out of the ice. Finn looks on sadly while Jake laughs at how dumb looking his Farmworld counterpart is. 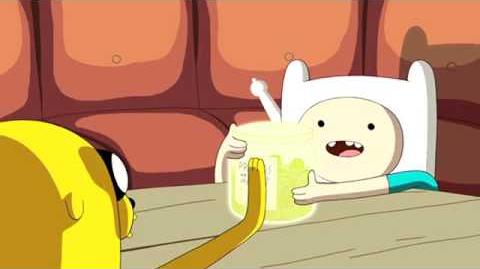 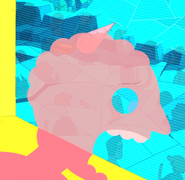 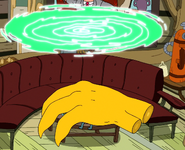 We have so much to talk about...

Retrieved from "https://adventuretime.fandom.com/wiki/Crossover?oldid=829402"
Community content is available under CC-BY-SA unless otherwise noted.