Melinda Hill[1]
Crab Princess is a princess who makes her first appearance in the episode "Breezy." She throws a party on the beach with numerous other princesses. Finn wants to make out with her to see if he will feel better and less depressed, so when she leaves, they kiss. However, Finn does not feel any better and continues kissing other princesses.

Crab Princess is a giant crab who wears a crown. Unlike most princesses, her crown does not have a gem. She has a pear-shaped head and six appendages: four arms and two legs. However, her two arms that aren't crab-like have very small hands. Her eyes are on stalks, but most of the time it appears her eyes are connected directly to her head. 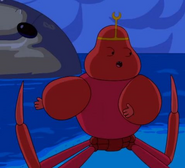