Jeremy Shada ("Prisoners of Love")
M. Emmet Walsh
("Jake The Dog" and onward)
Bettie Ward
("Come Along With Me," as the Poodle Woman)
The Cosmic Owl is a cosmic entity known to the inhabitants of Ooo for appearing in Premonition dreams. He seems to have a country-like dialect at first, but speaks in a normal tone from Jake the Dog onwards. Initially mysterious, the episode "Hoots" reveals he's a lonely, normal individual.

The owl first appears in "Prisoners of Love" in Ice King's Imagination Zone, after Ice King is knocked out by Finn. When Ice King asks why people do not like him, the Cosmic Owl answers, "You're a sociopath." 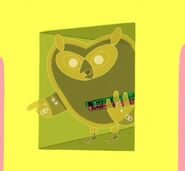 The Cosmic Owl boiling water at his house

The Cosmic Owl with Prismo