Candy Kingdom
The Coolest Hotel is a hotel in the Candy Kingdom that was introduced in "Candy Streets." It is located across the street from the Candy Drugstore. The hotel has at least three floors. Lumpy Space Princess has once stayed in Room 303. The keys to the hotel rooms have the hotel room number on one side and a picture of the building with the words "The Coolest Hotel" on the other side. The address to the hotel is 818. Finn and Jake later recommend Ice King stay there, but he is not interested.

The hotel is a run-down three story building decorated in the art deco style. Its interior and exterior are both dilapidated, with crumbling drywall, and peeling wallpaper and carpeting. 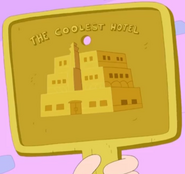