It is the series finale of Adventure Time, and is four episodes time-wise.

In the distant future, many years after the outcome of the Gum War, two friends named Beth and Shermy recover a rusty old mechanical arm that once belonged to Finn after it is unearthed by a Prize Ball Guardian. In their home, formerly known as the residence of Marceline the Vampire Queen, the two decide to visit the "King of Ooo" in order to inquire about its origins. They visit the King in his hideout at the top of Mount Cragdor and are greeted by BMO and their many artifacts and keepsakes of old. After Shermy and Beth accidentally break a few items, BMO asks them to leave. When they present BMO with Finn's lost mechanical arm, however, BMO agrees to tell the two the story of the Gum War.

In the past, according to BMO's retelling of the events, Finn and Jake are out on a reconnaissance mission for Princess Bubblegum when they discover Normal Man, Betty, and Maja hovering silently above Bonnie's army camp. Jake stretches the two of them to PB's command tent, where she is going over her battle plans with her allies, including Marceline, Flame Princess, Huntress Wizard, Lemongrab, Lumpy Space Princess, Duke of Nuts, Cinnamon Bun, Colonel Candy Corn, and Lady Rainicorn. Finn and Jake tell PB of Normal Man and Betty's sudden appearance, and they are interrupted by one of Gumbald's spies listening in to their plans. After Huntress Wizard incapacitates the Gumbaldian, PB decides that they must attack at once and prepares to sound the warhorn. Before she does, Marceline asks her to reconsider, having suffered through the Mushroom War herself, but PB is resolute and sticks to the warpath. Feeling that PB is wrong in her intentions, Finn decides to hatch a plan in order to stop the conflict.

After PB sounds the war horn, Finn tries to convince her to give Gumbald one last chance to surrender before the fighting starts. PB agrees after being reminded of her old friend Shoko. As a last-ditch attempt to stop the war, Jake unleashed the nightmare juice given to him and Finn by Nightmare Princess, forcing him, Finn, PB, Gumbald, and Fern into a hallucinatory slumber. Inside the dream realm, PB and Gumbald continue to be hostile towards each other. PB attempts to attack her uncle and Fern using an imaginary "love bazooka", but is interrupted by a singing Nightmare Princess, allowing Gumbald to escape. Jake pulls Jermaine into the dream with them, and despite Finn's protests, PB decides to pursue Gumbald. Fern transforms into a bird/pterodactyl-like and flies away, while Finn decides to follow him after turning into a butterfly.

Before Gumbald can wake himself up so he can gain the upper-hand on PB's forces, PB confronts him inside a nightmare version of one of the Gumball Guardians. The two begin to fight each other using giant toothbrushes but are suddenly rendered immobile by some unseen force. Meanwhile, butterfly Finn tries to calm Fern down, and two plummet to the ground. Finn attempts to appeal to Fern by reminding him that they are "two sides of the same coin" and that they share the same torment. PB and Gumbald recreate a nightmare version of the moment that PB defeated Gumbald by dousing him with his own dum-dum juice, only this time with the roles reversed. PB is doused and is transformed into a smaller, less intelligent version of herself.

Jake and Jermaine work together to find Finn's vault, where all of his repressed memories reside. They are able to find it after Jake hallucinates Lady Rainicorn and their children. PB and Gumbald are brought to tears after both witnessed the Candy Kingdom turn into a pile of goo. Finn and Fern continue fighting but are able to find common ground after Jake brings them Finn's vault. Together, they dive in and confront the Grass Demon. Fern kills it, ridding himself of its influence once and for all. However, with no Grass Demon to control him, Fern begins to deteriorate. After the four of them wake up from their dream, PB apologizes to Gumbald for not respecting his vision for the Candy Kingdom. Gumbald fake-accepts her apology and agrees to end the conflict, intending to betray her, but is tripped by Aunt Lolly and once again doused in his own dum-dum solution, turning back into Punch Bowl. Lolly accepts the peace agreement in his place, and PB proclaims that the two kingdoms shall live in harmony. However, they are all interrupted by the sudden arrival of Normal Man and GOLB.

Upon seeing the malevolent entity, Ice King has a flashback from before the Mushroom War, Simon and Betty discuss GOLB as described in one of Simon's many books while making ice cream sundaes. Simon states that GOLB's presence is felt in "every crevasse where chaos lurks". In the present, GOLB unleashed from his maw a dark green energy, which transforms a large portion of Gumbald's army into a hideous four-legged monster. Marceline tells PB that the beast must be stopped, or it could mean Ooo's destruction. PB orders her Banana Guards to run away, but Finn, Jake, Marcy, Flame Princess, Huntress Wizard, LSP, Lemongrab, Lady Rainicorn, and Fern stay behind to fight GOLB and defend Ooo. The Gumball Guardians attempt to stop the monster, but one of them is destroyed. Lolly tries to convince Gumbald's army to stay and fight, but they run away instead. Finn, Jake, Normal Man, and Ice King attempt to snap Betty out of her trance until she can help them banish GOLB. The remaining Gumball Guardian attempts to restrain the monster but is mutated into another monster instead. PB uses her elemental magic on the beast, releasing a hoard of evil bird-like creatures from the turned Guardian's mouth. Amidst all the chaos, LSP gets romantic with Lemongrab and the two kiss.

Ice King is able to reach through Betty's trance and awaken her by singing "Oh, Fionna" from his fanfictions. Realizing that he is trying to stop her, Betty becomes angry and releases an emotional supercharge that destroys Maja and hurls her and Ice King into GOLB's mouth. Finn follows them, but GOLB's jaw closes on Finn's mechanical arm, which falls to the ground below. Flame Princess is incapacitated by the mutated Gumball Guardian, and Marceline attacks it. The other mutated monster attacks PB and Fern, and although Fern tries to protect her, he is knocked aside leaving PB vulnerable. The creature stomps PB, and in retaliation, Marceline temporarily releases her vampire essence, transforming into a more monstrous form, and is able to destroy the mutated creature before it can cause further harm. PB, protected by her armor, is embraced by Marcy. Marcy confesses that she never wants to lose PB again, and the two kiss each other lovingly.

Inside GOLB, Ice King and Betty are slowly digested and broken apart into their "essential forms". Ice King reverts back to Simon, while Betty reverts back into a human. Reunited once again, Simon and Betty embrace each other as the space they are trapped in begins to shrink. With the bulk of PB's forces defeated, the mutated Gumball Guardian and revived mutated Gumbaldian army begin to wreak havoc on the rest of Ooo. Jake, transforming into his blue alien form, tries to stop them, but the treehouse is destroyed with BMO inside. Jake is devastated after seeing the wreckage but is comforted by BMO, who has suffered damages to his face screen. BMO begins singing "Time Adventure ", which creates an invisible force field that prevents GOLB's mutated creatures from touching them. Eventually, realizing that GOLB's essence is vulnerable to music, Finn and Jake's friends and allies join in on the song. Jake is able to amplify the sound of their voices and help Finn and Simon escape from inside GOLB, although Betty decides to stay behind as a sacrifice and use the Ice crown (which was restored to its essential form) to wish GOLB out of existence. When this doesn't work, she wishes instead that Simon is protected at all costs. As a result, Betty is fused with GOLB and the two become one singular entity. Devastated at Betty's decision, Simon cries out for her as the new GOLB leaves the planet through another portal, and is comforted by Marceline. Before the portal closes, the Ice Crown falls to the ground. Gunter decides to wear it, fuses with it and is transformed into Ice Thing after wishing to be more like Ice King.

Fern begins to disintegrate, and Finn promises to plant him in the remains of the Tree fort before he dies, leaving Finn a small seedling in the shape of the Finn sword. That night, Finn and Jake plant the seedling together, which causes a massive new tree to sprout with a remade Finn Sword lodged in the top. They are then visited by PB, who thanks Finn for convincing her to stop the war and disobeying her orders. PB comments that Finn is getting taller, before bidding them a good night. In the future, BMO concludes his story. Beth and Shermy ask what happened to Finn and Jake afterward, to which BMO replies that they went on and "lived their lives". After departing Mount Cragdor, Beth and Shermy go looking for Finn and Jake's tree fort, or what remains of it.

In the past, Finn and Jake are relaxing with the music hole, reflecting on the outcome of the war. Jake comments that music is indeed a powerful tool, to which the music hole agrees. She then sings them a new song that she had been working on, about a really specific feeling that is hard to describe. As the music hole sings, a montage plays showing what the cast gets up to.

Back in the future Beth and Shermy can be seen exploring the remnants of Finn and Jake's old tree fort. They climb the massive tree that has sprouted from Fern's seedling, and after pulling the remade Finn Sword, strike a very familiar pose similar to Finn and Jake's at the end of the show's opening sequence.

Ashly Burch's name is misspelled as "Ashley Burch" in the opening credits. 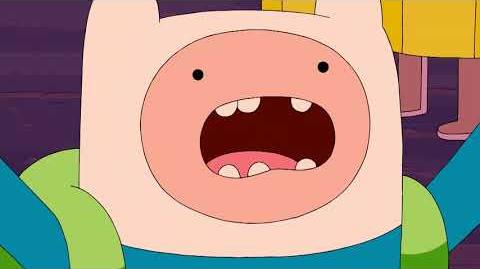 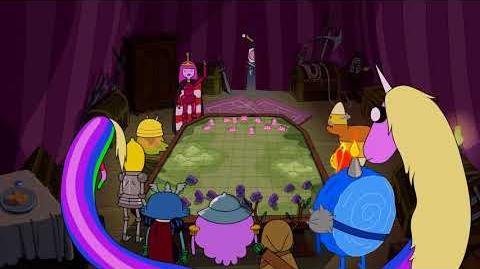 Adventure Time Come Along With Me Finale Song Cartoon Network 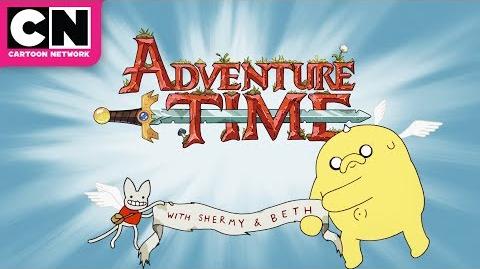 SDCC 2018 poster
Add a photo to this gallery

Shermy & Beth arrive at the Tree

Add a photo to this gallery
Retrieved from "https://adventuretime.fandom.com/wiki/Come_Along_With_Me?oldid=791682"
Community content is available under CC-BY-SA unless otherwise noted.