Steve Little
The Cobbler is a character who appears in the episode "His Hero." He first approaches Finn and Jake for help when being chased by a dragon. However, they cannot help him as they had just pledged to be non-violent heroes. Finn and Jake still attempt to help the Cobbler, which results in a variety of comical mishaps that cause him more harm than relief. He is last seen being blasted by Lumpy Space Princess' cyborg eye beam, right after he remarks, "You're the most beautiful—." He is then pushed off-screen when she unintentionally charges at him.

The Cobbler has light-green skin like the other townspeople of the town in which he lives. He wears frayed brown pants and a brown apron with a mallet in its pocket. He also wears a large pair of circular, blue-lensed glasses with black frames. He wears a large brown hat with a tall, rounded top, two lighter brown belts around the middle, and what appear to be ear flaps around the sides and back. For a time in the episode, his skin is transformed into a pebbly coat of "armor" after eating Finn's stone-skin potion-spiked gruel. 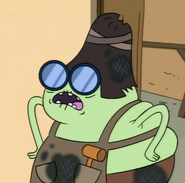 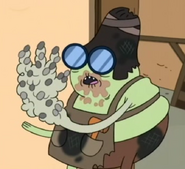 Cobbler in the Wizard Battle Arena

Cobbler on the far right.
Español
Community content is available under CC-BY-SA unless otherwise noted.
Advertisement