Sam Marin
Clarence was a character who appeared in "Ghost Princess." He was the lover of Ghost Princess until he killed her in a battle for her kingdom. Afterward, he became a broken man and died after consuming too much Softy Cheese at a Squeez-E-Mart convenience store and exploded. Jake was at the mart at the time, and having witnessed the Softy Cheese explosion (and being covered in the cheese that Clarence consumed), he became traumatized and wouldn't eat Softy Cheese for a long time.

Clarence was buried in the "ne'er-do-well" section of the Cemetery under a gravestone that reads "R.I.P. Some Donkus." He became a ghost who had no memory of his former life. Clarence met Ghost Princess and immediately defended her when Boilbee was making her upset. He then took her to see the Spirit Waves. Finn and Jake figured out it was Clarence who killed Warrior Princess (now Ghost Princess) by matching the remains of a dagger handle in Clarence's grave with the tip of a dagger in Warrior Princess' remains. Ghost Princess almost ascended to the Dead World upon learning how she died. When Clarence couldn't come with her he frustratingly proclaimed that his life was "like a fart." Because these were his last words before he died, Jake remembered who the man at the mart was, resulting in Clarence remembering his death. He died by exploding after eating too much cheese. Ghost Princess said that she forgave him, and he was then able to ascend along with her.

In his ghost form, Clarence has the same type of skin tone of all other ghosts on the show, however, compared to Ghost Princess, he has a darker blue coloring. He has long hair that trails behind him and wears a headband with antler ears attached, that may be part of his body. From one of his antlers, a small sword hangs. Clarence also wears a jacket.

When he was alive, Clarence looked very similar to his ghost form, the only changes were that he had green skin and wore pants. He is also shown in battle armor. In both forms, he wears his signature headband. 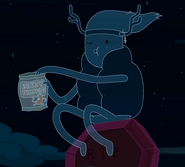 His grave and corpse

When he was alive 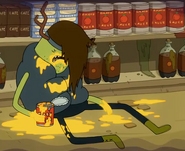 Ascending to the 50th Dead World