Finn and Jake, in hopes of helping a little girl named Penny get back her stolen basket, enter into a city where everyone is a thief, and become slowly corrupted by their surroundings.

Finn is trying to walk on four legs like Jake when they come across a city covered by a dome of cracked desert ground. A Hag appears and tells them that this is the City of Thieves, a place that turns anyone who goes there into a thief. Finn and Jake hear the cries of a young girl named Penny outside the city. She tells Finn that thieves have stolen her flower basket, but he is unable to get the basket back because the thieves in the city are endlessly stealing and re-stealing it from each other.

Penny then tells Finn and Jake about a king thief who steals from little girls and takes their belongings to his tower, which is protected by a magical barrier to keep other thieves out. Finn volunteers to enter the tower and get the king's treasure chest, which Penny says might contain her basket. Meanwhile, Jake cannot cross the barrier because he could not resist stealing a pair of shiny red boots. Finn enters the tower and takes the chest, which he finds in the chest of the king thief's skeleton. When he emerges, Penny grabs the chest, revealing that she has tricked Finn into stealing the treasure for her. The Hag reappears to gloat about Finn now also becoming a thief. Traumatized over becoming impure, Finn decides to embrace his dark side and get revenge on Penny for stealing his purity.

Finn and Jake become avengers and run around the city stealing things, including a crossbow, a pair of swords, and bar of soap from a bathing horse. They confront Penny in her tent and wash off the dirt that marks her as a thief, becoming clean in the process as well. Thinking they have become pure again, Finn and Jake celebrate with Penny, who claims to have reformed—then immediately strips him of his clothes down to his briefs. Finn screams Penny's name and the episode ends. 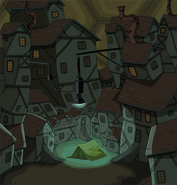 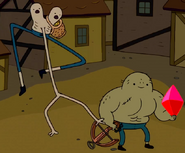 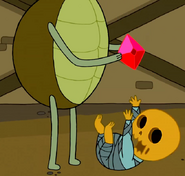 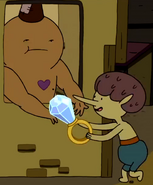 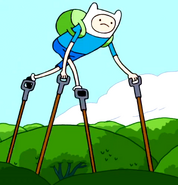 Finn on all fours 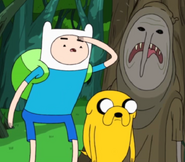 Hag appearing from the tree

Even the rat's cheese is stolen.

Finn's clothes are stolen. Shotgun is visible in the background, on the left.

Penny, with what seems to be a drum-loaded Thompson machine gun in the background